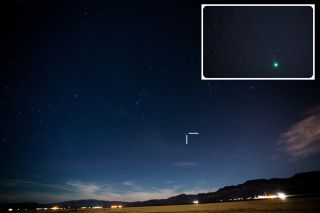 Night sky photographer Tyler Leavitt used a wide-angle lens to capture this photo of the green Comet Lovejoy from Las Vegas, Nevada on Jan. 7, 2015. The comet is shown first in a wide-angle view with the Orion constellation, with the inset box showing the view from a telephoto lens.
(Image: © Tyler Leavitt)

Amateur astronomers captured amazing photos of a bright comet as it raced across the sky this week.

The comet was officially catalogued as C/2014 Q2, but many refer to it as Comet Lovejoy, named for the amateur astronomer Terry Lovejoy who discovered it in August 2014. On Wednesday night (Jan. 7) the comet reached its closest distance to Earth at about 43.6 million miles (70.2 million kilometers) away. The comet is traveling on a particularly elongated orbit and likely won't be visible again for another 8,000 years.

The comet is now faintly visible to the unaided eye in dark locations, but the bright January moon has been making it difficult for stargazers to spot it. Night sky photographer Tyler Leavitt of Las Vegas, Nevada was able to snap some photos of the comet Wednesday. [How to See Comet Lovejoy]

"I ran out tonight to try and grab a glimpse of Comet Lovejoy," Leavitt told Space.com via email."Some high clouds were moving in, but I managed to grab a couple of photos."

Leavitt was able to snap one photo with a wide-angle lens and later drew in a box around the comet to help it stand out. For a second, close-up photo he used a telephoto lens and a tracking mount.

"I was obviously still too close to the Las Vegas lights and had a hard time seeing it without binoculars," Leavitt said. "With the aid of binoculars it was readily visible as a fuzzy patch with a green tone. I couldn't see a tail, but a small ion tail was captured in the telephoto shot."

Another amateur astronomer, photographer Chris Bakley of Cape May, New Jersey, took a different approach to capture a photo of Comet Lovejoy and the Orion nebula on Wednesday night. Bakley used a sheet of foam to create the double exposure and get both celestial objects into the same photo.

Amateur astronomer Terry Lovejoy discovered the comet last year from his roofdeck observatory in Australia, and it's the fifth comet he's discovered since 2007. The apparent green color of the comet likely comes from cyanogen, a poisonous gas that glows green when sunlight hits it.

Stargazers can pick out the comet by looking for it along a south to north path almost perpendicular to the celestial equator.

The comet will be visible throughout much of January, but it reached its brightest in the past week with a magnitude of 4.6. Right now it's speeding through the sky at about 3 degrees per day. (For reference, your clenched fist held to the sky covers about 10 degrees.)

Editor's note: If you snap a great photo of Comet Lovejoy, or any other night sky view that you'd like to share for a possible story or image gallery, you can send images and comments in to managing editor Tariq Malik at spacephotos@space.com.