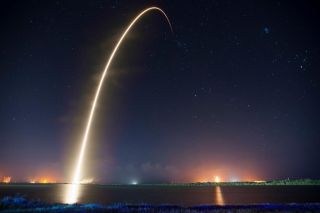 The predawn launch of a commercial SpaceX Falcon 9 rocket from Cape Canaveral Air Force Station in Florida on Tuesday, Jan. 6, may be visible to observers along the Eastern United States. Shown here, a SpaceX Falcon 9 launches the company's Dragon cargo ship to the International Space Station for NASA on Sept. 21, 2014.
(Image: © SpaceX)

Early-bird skywatchers along the eastern United States have an opportunity, weather permitting, to see the private spaceflight company SpaceX launch a robotic Dragon capsule to the International Space Station before dawn tomorrow (Jan. 6).

The Dragon space capsule will launch into orbit atop SpaceX's Falcon 9 v1.1 rocket at 6:20 a.m. EST (1120 GMT) tomorrow from Florida's Cape Canaveral Air Force Station. As was the case with NASA's space shuttle launches to the station, tomorrow's launch will travel nearly parallel to the U.S. East Coast. That means the glow from the Falcon 9's engines should be visible in varying degrees along much of the Eastern Seaboard.

You can watch the Dragon launch in live webcasts provided by NASA TV and SpaceX. NASA's webcasts will begin at 5 a.m. EST (1000 GMT), with SpaceX's webcast beginning at 6 a.m. EST (1100 GMT), about 20 minutes before liftoff.

The official weather forecast continues to show a 60 percent chance of favorable weather for the launch of SpaceX's Falcon 9 rocket from Cape Canaveral.The primary concern is with thick clouds over Florida's Space Coast at launch time. A cold front will pass over Central Florida today (Jan. 5), bringing moisture to the area. If the launch does not occur tomorrow, the next launch opportunity is scheduled for Friday morning (Jan. 9).

SpaceX's Falcon 9 rocket is launched into orbit using two stages. The first stage uses nine Merlin engines, which will fire together for 3 minutes after liftoff, then shut down. Five seconds later, the first and second stages will separate. Seven seconds after separation, the single-engine second stage will ignite, burning for another 6 minutes and 2 seconds. The Dragon capsule will then separate from the second stage and head into orbit. [SpaceX's Falcon 9 and Dragon Explained (Infographic)]

So while the Falcon 9's first stage should create a fairly conspicuous light in the sky, the second stage will likely be considerably dimmer.

The upcoming Dragon launch is SpaceX's fifth commercial cargo mission to the International Space Station for NASA. The company also hopes to test an innovative reusable rocket technology during the launch that aims to land the Falcon 9 rocket's first stage on a floating ocean offshore platform in the Atlantic Ocean.

SpaceX has a $1.6 billion deal with NASA to make 12 such flights. Last September, NASA also picked SpaceX to fly astronauts to the space station by 2017 using a manned version of the Dragon spacecraft.

What you may see

In the southeastern United States, the nighttime Falcon 9 launch should be readily visible, thanks to the fiery output of its nine first-stage engines. The light emitted will be visible for the first 3 minutes of the launch out to a radius of about 500 miles (805 kilometers) from Cape Canaveral, or an area about three times the size of Texas. [Watch a Falcon 9 Rocket Launch at Night (Video)]

But the spectacle won't be as dramatic as that provided by NASA's now-retired space shuttle, which was much bigger and whose solid rocket boosters shed hot, glowing-white aluminum oxide in the accompanying exhaust and smoke trail. The Falcon 9 engines burn kerosene and liquid oxygen, which aren't as bright. But Falcon 9 rocket launches are generally more luminous than Atlas 5 rocket launches, which would be the closest comparison.

Depending on the location you're viewing from, the Falcon 9 might become visible anywhere from just a few seconds after launch up to perhaps 3 minutes after it leaves Cape Canaveral.

After the first stage shuts down, the rocket will put out only the light from its single second-stage engine. At that time, the Falcon 9 should appear as a small, pulsating, fast-moving star that will shine with a yellowish-orange glow.

People who remember sighting the brilliant glow of the space shuttle as it raced along the Atlantic Seaboard on its way to orbit may be disappointed when looking for the Falcon 9. Still, it might be worth the attempt to try to see what might be seen.

As the old saying goes: nothing ventured, nothing gained.

For most viewers, the Falcon 9 will appear to skim the horizon, so be sure no buildings or trees obstruct your view. Because the rocket likely will appear rather small and dim, scanning the sky with binoculars might help.

Depending upon your distance from the coastline, the SpaceX rocket will be relatively low on the horizon — 5 to 15 degrees. (Your clenched fist held at arm's length covers about 10 degrees of sky.) If you're positioned near the edge of a viewing circle, the rocket will barely come above the horizon and could be obscured by low clouds or haze.

If the weather is clear, keep in mind the Falcon 9 likely will appear to move very quickly, much more quickly than an orbiting satellite, due to the rocket's near-orbital velocity at low altitudes (30 to 60 mph, or 48 to 97 km/h). It basically travels across 90 degrees of azimuth in less than a minute.

And, of course, before you head out to look for the rocket, make sure it has actually left the launch pad. Live coverage of the launch will be available here at Space.com, courtesy of NASA TV.

Editor's note: If you capture a photo of the SpaceX rocket launch from your location on the U.S. East Coast, let us know. You can send images and comments in to managing editor Tariq Malik at: spacephotos@space.com.