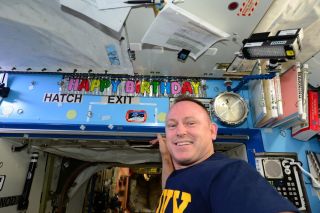 How do you celebrate a birthday in space? A NASA astronaut on the International Space Station found out how to have a cosmic birthday party Monday (Dec. 29).

NASA astronaut Barry "Butch" Wilmore celebrated his 52nd birthday from his post on the space station yesterday. Mission Controllers on the ground sang "Happy Birthday" to Wilmore in honor of the special day. You can watch a video of NASA officials singing to Wilmore as well.

"That was fantastic. You ought to consider going on tour," Wilmore joked with the flight controllers after the song. Wilmore flew to the space station for his approximately 6-month-mission in September with cosmonauts Alexander Samokutyaev and Elena Serova. NASA astronaut Terry Virts, European Space Agency astronaut Samantha Cristoforetti and cosmonaut Anton Shkaplerov also join the three crewmembers on the station.