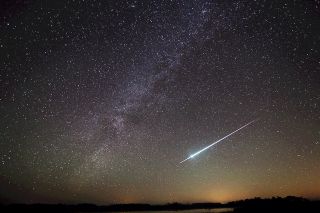 December is usually marked by a series of meteor showers. Geminid meteors (like the one seen in this picture of Florida) light up the skies at the beginning of the month, while the Ursids - which peak tonight (Dec. 22) - put on a show just before Christmas.
(Image: © Jean Clark )

The Ursid meteor shower peaks tonight, and it should be a great show.

When skywatchers think of meteor showers during the month of December, the Geminid shower (which peaked earlier this month) usually comes to mind. But the Ursid meteor shower — peaking tonight and into the wee hours of Tuesday (Dec. 23) morning — should also offer skywatchers a good view this year.

Even if you can't see tonight's meteor shower due to light pollution or bad weather, you can still catch the Ursids online thanks to the Slooh Community Observatory. Tune in for Slooh's Ursid meteor shower webcast tonight starting at 8 p.m. EST (0100 Dec. 23 GMT) live on Space.com. You can also watch the webcast directly through Slooh (http://live.slooh.com/).

The Ursids are so named because they appear to fan out from the vicinity of the bright orange star Kochab, in the constellation of Ursa Minor, the Little Bear. Kochab is the brighter of the two outer stars in the bowl of the Little Dipper (the other being Pherkad), that seem to march in a circle like sentries around the North Star, Polaris. These meteors are sometimes called the Umids, in a rather unsuccessful attempt to make clear that their radiant is in Ursa Minor, not Ursa Major. [Take Space.com's meteor shower quiz]

The fact that Kochab is positioned so near to the north pole of the sky means that this star almost never sets for most viewers in the Northern Hemisphere. And since the Ursids seem to fan out from this particular region of the sky, you have a reference point to look for these faint, medium-speed meteors all through the night if you care to.

The fact that the shower peaks tonight is good news for observers braving the cold to see the display. The moon is just one day past its new phase, meaning that light reflected from Earth's natural satellite won't wash out the shower.

"These meteors are best seen during the last dark hour before dawn, when the radiant lies highest above the horizon in a dark sky," Robert Lunsford of the American Meteor Society said. "On the morning of maximum, hourly rates of between five to 10 Ursids may be seen. Plunging through the Earth's atmosphere 19 miles [30 kilometers] per second, the Ursids produce mostly medium-slow meteors. Very little activity will be seen away from the night of maximum activity."

December's new moon then gives skywatchers the perfect pre-Christmas cosmic treat: A clear view of the Ursid meteors in a dark sky. And this is also fortunate because the Ursids "badly need observing," the British Astronomical Association states.

It's not necessarily surprising that observers have neglected the Ursids. Everything about them is wintry. They usually coincide with the winter solstice, and are best seen by polar bears since they come from near the celestial North Pole. They are actually the dusty debris shed by the periodic comet 8P/Tuttle, which circles the sun in a 13.6-year orbit and was last seen in early 2008.

On occasion, the Earth has interacted with a dense, narrow stream of particles shed by this comet, and this intersection has caused brief outbursts of Ursid meteors numbering in the dozens per hour. This happened in 1945 and 1986, for example, though other outbursts may have been missed. No such interaction is expected this year, but still, you never know!

Editor's Note: If you snap an amazing photo of the Ursids or any other skywatching sight and would like to share it with Space.com for a possible story or gallery, please send the photo and comments to managing editor Tariq Malik at spacephotos@space.com.