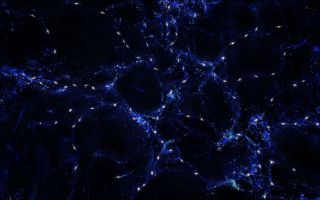 A spooky new image shows a web of bright galaxies aligned in the largest structures ever discovered in the universe.

Scientists working with a telescope in Chile discovered the alignment by studying 93 quasars — objects that shine very brightly and are powered by supermassive black holes — from the early universe. The picture (an artist's impression created using data collected by the European Southern Observatory's Very Large Telescope) shows the quasars aligned in a web of blue against the black sea of space.

Earlier studies have found that these quasars are "known to form huge groupings spread over billions of light-years," European Southern Observatory (ESO) representatives said in a statement. The quasars studied by the research team formed when the universe was about 4.6 billion years old, about one-third of the age it is now, ESO added. [Biggest Structure in the Universe Explained (Infographic)]

"The first odd thing we noticed was that some of the quasars' rotation axes were aligned with each other — despite the fact that these quasars are separated by billions of light-years," study leader Damien Hutsemékers, from the University of Liège in Belgium, said in the same ESO statement.

Scientists working with the Very Large Telescope found that the rotation of the quasars is parallel to the large-scale structures where the galaxies are found.

"The alignments in the new data, on scales even bigger than current predictions from simulations, may be a hint that there is a missing ingredient in our current models of the cosmos," team member Dominique Sluse of the Argelander-Institut für Astronomie in Bonn, Germany and University of Liège, said.

Team members said that the likelihood these results were created by chance is less than 1 percent, according to ESO. The new study is detailed in the Nov. 19 issue of the Journal Astronomy & Astrophysics.

The European Southern Observatory is a collaboration of 15 different countries including France, Brazil and Denmark. ESO is responsible for operating three observing sites in Chile at La Silla, Paranal and Chajnantor. The Very Large Telescope is based in Paranal.