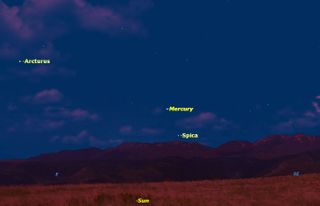 Mercury is visible in the night sky from Nov. 1, 2014, and into the next few weeks.
(Image: © Starry Night software)

Get up early or stay out late to see some of the brightest planets in the night sky this month.

Venus and Saturn are effectively out of the viewing loop this month with both mired deep in the glare of the sun. Mars continues to slowly fade, but it’s placed against a relatively dim star background, making it stand out in southwest evening twilight. And dazzling Jupiter rises before midnight and is now visible for more than half the night.

Scroll down to see a schedule of some of the best planet sightings you can expect this month:

Mercury: Last week, the closest planet to the sun reached its greatest elongation on Nov. 1, and for several mornings the planet rose in a dark sky. But soon Mercury will begin to gain on the sun, and its midtwilight elevation drops. By Nov. 13, it will only be about 5 degrees above the horizon. With binoculars, it might be possible for you to follow Mercury for a few mornings as it moves into brighter twilight. [See images of the best night sky events of November]

Venus: Venus was in superior conjunction — on the opposite side of the sun from Earth — on October 25. It then started edging upward at sunset, but it still sets too soon after the sun to be seen through much or all of November.

Jupiter: Shortly after 11 p.m. local time on Nov. 13, look low to the east-northeast horizon to watch the moon slowly ascend the sky. And sitting about one clenched fist's width to its left will be Jupiter, which looks like a brilliant “star” shining with a steady, silvery light. By 1 a.m., Jupiter will be high enough for a fairly steady telescopic view. But its dusky cloud belts and Great Red Spot can be seen more clearly when the planet is highest in the south soon after dawn breaks.

Saturn: The ringed planetis in conjunction with the sun on Nov. 18, and is not visible at all this month.

Mars: The Red Planetis dimmer these days, but it’s also the only first-magnitude object glimmering into view low in the southwest at dusk. But that’s still bright enough to stand out prominently among the faint star fields in eastern Sagittarius.

Mars has now retreated to a distance of 168 million miles from Earth and now shines with only a tenth of the brightness compared with last April. On Nov. 25, look low near the west-southwest horizon about an hour after sunset for a slender crescent moon; Mars will sit about 9 degrees to its left. Mars is now setting about 3.5 hours after sundown. (For reference, your fist held at arm's length against the sky is about the equivalent of 10 degrees.)