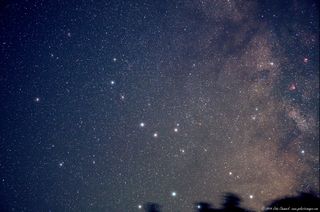 The stars of Sagittarius shine in this astrophotographer photo.
(Image: © John Chumack | www.galacticimages.com)

On these late-summer evenings after the sun has set, look low in the southern sky for the classical Archer: the constellation Sagittarius.

Although the Archer is often depicted in allegorical star atlases as a centaur (half man, half horse), long ago, he was not a centaur at all but simply a standing Archer looking with some apprehension toward the Scorpion immediately to the west.

It is said that the wisest and kindliest of all the centaurs was Chiron. It was he who educated many of the most famed heroes of antiquity: Jason of the Golden Fleece, Achilles, Hercules and Aesculapius. The story goes that in laying out the zodiac, Chiron made one figure in his own likeness: Sagittarius. [Quiz: Do You Know the Constellations?]

Although tracing out an archer-centaur among Sagittarius' stars is somewhat daunting, visualizing it as a teapot is quite easy. As star pictures go, it's one of the best. About 40 years ago, the late astronomy author George Lovi (1939-1993) pointed out that stargazers could even augment Sagittarius' tea service with a cosmic teaspoon and lemon as well. The teaspoon is made from stars in northern Sagittarius, while the lemon is an alternate rendition of the faint constellation Corona Australis, the Southern Crown, which lies directly beneath the Teapot.

Now is also the best time to enjoy viewing the summer Milky Way. Although it's never visible from large cities with lights, smoke and haze, it can still be readily viewed from distant suburbs and rural locations.

Before the invention of the telescope, the true nature of the Milky Way was a mystery. Binoculars and telescopes reveal that our galaxy consists of dense clouds of individual stars. Several of these clouds of stars, surrounded by a few dark regions for contrast, can be seen with binoculars in the area of the Milky Way about halfway between the star Altair and Sagittarius.

Here lies the "hub", or central condensation, of our own galaxy — an area of density and complexity.  Even to the unaided eye, the view is one of excitement and beauty. Sweep through this part of the sky with binoculars, and you'll find concentrations of a staggering number of stars.

Editor's Note: If you capture an amazing photo of the northern lights this weekend and would like to share the images with Space.com, you can send photos and comments to managing editor Tariq Malik at spacephotos@space.com.

Joe Rao serves as an instructor and guest lecturer at New York's Hayden Planetarium. He writes about astronomy for Natural History magazine, the Farmers' Almanac and other publications, and he is also an on-camera meteorologist for News 12 Westchester, New York.Follow us @Spacedotcom, Facebook and Google+. Original article on Space.com.