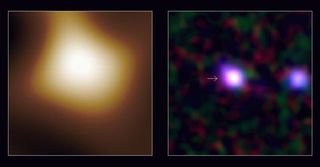 A fuzzy image from the SCUBA camera (left), and the corresponding view from NASA’s Spitzer Space Telescope (right). The galaxy emitting the radiation detected by SCUBA is shown with an arrow. Astronomers believe the radiation is generated in violent starbursts.

There's an intriguing glow across the universe that astronomers have been trying to pin down for years. Recent observations appear to have found the source: compact galaxies in the early universe that were generating stars at a furious pace.

The diffuse radiance is a certain type of so-called background radiation that is everywhere in space but, until recent years seemed to come from no specific locations. In this case, it is a wavelength of radiation half a millimeter long that straddles the high end of the radio spectrum and the low end of the infrared.

Background radiation can be likened to the first and faint glow of dawn, when the Sun is not visible but Earth's atmosphere is infused with a hint of light. The submillimeter background infuses all of the cosmos.

Similar cosmic backgrounds exist at other wavelengths of the electromagnetic spectrum, including infrared and ultraviolet light.

Among the more interesting of the background glows is the cosmic microwave background, the remains of radiation unleashed just 380 million years or so after the theoretical Big Bang. It serves as the only glimpse to that early epoch of the universe. Pioneering observations in the 1960s suggested a known X-ray background, too, was the result of many individual sources, and by the year 2000 the case was closed.

The submillimeter background had been loosely linked to distant galaxies surveyed by the SCUBA camera (Sub-millimeter Common User Bolometer Array) on the James Clerk Maxwell Telescope in Hawaii. But the galaxies had not been located precisely. Instead they were associated with bright areas in fuzzy images -- astronomical observations just beyond the limits of resolution.

New observations with NASA's Spitzer Space Telescope pinpointed the submillimeter-emitting galaxies in the SCUBA images by noting their emissions in infrared, too.

"We've known all along that they had to be far away and rapidly turning all their gas into stars, but now we know their true distances and ages," said Steve Willner of the Harvard-Smithsonian Center for Astrophysics.

Willner told SPACE.com that each of the galaxies is small yet has an enormous rate of star formation.

Having precisely located the galaxies, he said, would now allow closer scrutiny. And because each of the galaxies represents a baby picture of the Milky Way, astronomers could learn something about galactic evolution.

"The SCUBA galaxies probably represent the earliest stages of star formation in galaxies that will end up being like the Milky Way," Willner said.

Astronomers from the University of Kent, the Royal Observatory Edinburgh and the University of Oxford in the United Kingdom also worked on the study. The results will be detailed in a special supplement to the Astrophysical Journal in September.