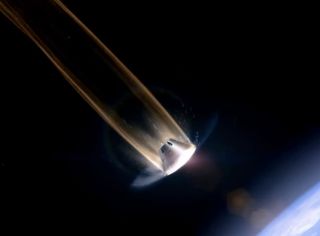 An artist's conception of what the Orion spacecraft might look like when it plunges through Earth's atmosphere during its test flight in December 2014.
(Image: © NASA)

A NASA spacecraft designed to take humans farther into space than ever before has just been completed ahead of its first test flight next month, and you can learn more about the Orion space capsule during a webcast tomorrow.

Orion is expected to take astronauts to far-off destinations like an asteroid in Earth's orbit or even Mars. The spacecraft is scheduled to fly into space for the first time for a daring test flight on Dec. 4 from Kennedy Space Center in Florida. NASA officials are planning to discuss that first, complicated test flight for Orion during a news conference starting Thursday (Nov. 6) at 11 a.m. EST (1500 GMT). You can watch the Orion briefing live on Space.com via NASA TV.

"This is just the first of what will be a long line of exploration missions beyond low earth orbit, and in a few years we will be sending our astronauts to destinations humans have never experienced," Bill Hill, deputy associate administrator for Exploration Systems Development, said in a statement. "It’s thrilling to be a part of the journey now, at the beginning." [See images of the Orion spacecraft]

In December, an uncrewed Orion capsule will be lofted into the air by a Delta 4 Heavy rocket to begin the 4.5-hour-long test flight (called Exploration Flight Test-1). The spacecraft is expected to fly 3,600 miles from Earth for its first spaceflight, NASA officials said. The test vehicle will be outfitted with plenty of sensors to see how the craft's major systems behave during flight.

As Orion ascends and then descends, it will fly through a potentially dangerous area of high radiation, called the Van Allen radiation belt. This part of the test flight will allow scientists to see how Orion stands up to the radiation.

Once the spacecraft finishes its time in space, Orion will start its re-entry into Earth's atmosphere.

"Seventy-five miles above Earth, the spacecraft enters the atmosphere," NASA engineer Kelly Smith said in the Orion "Trial by Fire" video. "Things happen quickly. We're now traveling more than 20,000 mph. Air particles pushed out of the way heat up, an envelope of hot plasma surrounds the vehicle as it plummets toward Earth. The plasma reaches temperatures of up to 4,000 degrees Fahrenheit, almost twice as hot as molten lava. This may be the most dangerous part of the flight."

The spacecraft's heat shield, which will be used to protect future astronauts during re-entry, will be put to the test as Orion comes back into the planet's atmosphere. Once the capsule reaches a specified altitude, its parachutes will deploy, slowing it further before splashing down in the Pacific Ocean.