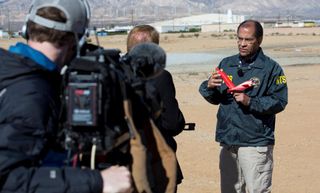 Christopher Hart, acting chairman of the National Transportation Safety Board, uses a model to explain how SpaceShipTwo's "feathering" descent system works. The system deployed too early during the vehicle's tragic test flight of Oct. 31, 2014.
(Image: © NTSB)

Investigators have formed a new working group to take a close look at the pilot interface systems on Virgin Galactic's SpaceShipTwo and released a detailed new timeline of the vehicle's tragic accident.

SpaceShipTwo crashed on Friday (Oct. 31) during a test flight, killing co-pilot Michael Alsbury and injuring pilot Peter Siebold. A team from the National Transportation Safety Board (NTSB) determined Sunday (Nov. 2) that SpaceShipTwo's re-entry "feathering" system deployed too early, and on Monday (Nov. 3) the investigators created a "human performance group" whose work could shed light on why this happened.

The group will "look at issues such as displays, checklist design [and] other issues relating to the interface between the flight crew and the vehicle," NTSB Acting Chairman Christopher Hart said during a news conference Monday night. [See images of the SpaceShipTwo crash investigation]

SpaceShipTwo's twin rudders can be rotated up, or "feathered," to increase drag and stability during the vehicle's descent. Pilots command this maneuver by doing two things: moving a lever to the "unlock" position, and then moving a handle to the "feather" position.

Friday's feathering was unusual for two reasons, Hart has said. First, it occurred after just one of the two above actions was performed (the handle was never switched to "feather" mode). And second, the lever was moved to "unlock" too early — when SpaceShipTwo was traveling at about Mach 1.0 (the speed of sound) rather than the prescribed Mach 1.4.

On Monday night, Hart also laid out the timeline of SpaceShipTwo's final moments in the air near California's Mojave Air and Space Port.

"And in that period of time, the telemetry data shows that the feather went from 'locked' to 'unlocked,'" Hart said. "Soon after that, the feather itself began to deploy."

By 10:07:34 — just 15 seconds after SpaceShipTwo was released to fly freely — all telemetry and video data were lost, he added.

The main debris field generated by the crash spans about 5 miles (8 kilometers) from end to end, Hart has said. But on Monday, he announced that small pieces of SpaceShipTwo have been found as much as 30 to 35 miles (48 to 56 km) northeast of the primary field.

The NTSB "Go-Team" arrived in the town of Mojave early Saturday morning (Nov. 1) to begin its on-scene investigation, which should last a few more days. But it may take the investigators up to 12 months to complete their analysis after they return to Washington, D.C., Hart said.

Both Alsbury and Siebold worked for Scaled Composites, the Mojave-based firm that built and tests SpaceShipTwo for Virgin Galactic. Alsbury's co-workers have set up a memorial fund at the crowdfunding site gofundme.com to help support Alsbury's wife and two children. As of late Monday night, the effort had raised nearly $80,000.

SpaceShipTwo is designed to carry passengers up to an altitude of 62 miles (100 kilometers), giving them a few minutes of weightlessness and a view of Earth against the blackness of space. About 700 people have signed up to ride the spaceship; tickets currently sell for $250,000 each.

SpaceShipTwo remains in the test phase. Friday's mission was the vehicle's fourth rocket-powered test flight and its 55th flight test of any kind.