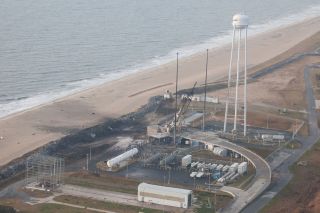 This Aerial view of a launch pad shows the aftermath of an Antares rocket explosion. Image taken on Oct. 29, 2014.
(Image: © NASA/Terry Zaperach)

While the fiery Antares rocket explosion did not destroy the launch pad or fuel tanks at the launch complex at NASA's Wallops Flight Facility on Wallops Island, Virginia, "some repairs will be necessary," according to Orbital representatives. NASA officials have found that some support buildings at Wallops have blown-out windows and doors, and a sounding rocket launcher and other buildings near the pad have severe damage. The initial assessment also showed that the transporter erector launcher and lightning suppression rods at the pad sustained the most damage, according to NASA.

It will take multiple weeks to completely assess the areas affected by the launch mishap, space agency officials added. [See images of the Antares explosion]

"I want to praise the launch team, range safety, all of our emergency responders and those who provided mutual aid and support on a highly professional response that ensured the safety of our most important resource — our people," Wallops director Bill Wrobel said in a statement. "In the coming days and weeks ahead, we'll continue to assess the damage on the island and begin the process of moving forward to restore our space launch capabilities. There's no doubt in my mind that we will rebound stronger than ever."

NASA officials also released an aerial view of the pad taken on Wednesday (Oct. 29). The image shows blackened sand and debris around the area where the rocket exploded just after liftoff. For scale, the water tower in the picture is 307 feet tall (93.6 meters), and Antares rises 133 feet (40 m) above the ground. (The Antares broke apart as it cleared the top of the tower.)

The Antares exploded while attempting to launch an unmanned Cygnus spacecraft on a supply run to the International Space Station. Orbital currently holds a $1.9 billion contract with NASA to fly eight resupply missions to the orbiting outpost. This launch would have kicked off the third official mission under that agreement.

Wallops' environmental team has found that most of the effects of the explosion are limited to the southern third of Wallops Island, according to NASA officials. Researchers also collected air samples just after the rocket failure and found no hazardous substances in the samples, space agency officials added.

"The Coast Guard and Virginia Marine Resources Commission reported today they have not observed any obvious signs of water pollution, such as oil sheens," NASA officials said. "Furthermore, initial assessments have not revealed any obvious impacts to fish or wildlife resources."

Editor's Note: NASA officials are urging residents of the area around the launch site to keep away from any rocket debris that might wash up on shore or be found on land. If you think you may have found pieces of the rocket, or if your property sustained damage from the failed launch, please call the incident response team at (757) 824-1295.