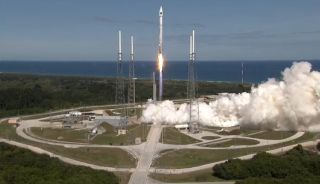 The $245 million Boeing-built satellite, dubbed GPS 2F-8, will join the Air Force's Global Positioning Satellite network, which was originally built as tool for the U.S. military but is now used also by civilians around the world to map their locations. [See Photos of the Atlas 5 Launch]

"Since its inception in the 1970s, GPS has evolved into an essential capability that enables technologies employed every day across our nation and the world," Col. Bill Cooley, director of the Air Force's Global Positioning System Directorate, told reporters in a prelaunch conference last week. "Thanks to the investment of the American people and stewardship of the Air Force, we are able to improve on a service that greatly benefits the U.S., allied warfighters and billions of GPS users around the world."

This mission is the fourth GPS satellite launch this year, and it is the eighth in a series of 12 GPS 2F satellites, which have a design life of 12 years. The first of these satellites launched in 2010. Compared to previous generations, this block of GPS satellites has improved accuracy, faster processing and better resistance to jamming. Their signals can help determine location within feet, velocity within a fraction of a mile per hour and time within a millionth of a second, according to the military.

The mission also marks a major milestone for ULA: The 50th Atlas 5 flight since the two-stage rocket's maiden voyage in 2002. The Colorado-based ULA is a cooperative venture by Boeing and Lockheed Martin. Atlas 5 is powered by Russian-built RD-180 engines.

The launch comes less than 24 hours after a U.S. space disaster further up the East Coast at NASA's Wallops Flight Facility on Wallops Island, Virginia. Orbital Sciences' Antares rocket exploded in a massive fireball seconds after launch, destroying an unmanned Cygnus capsule that was supposed to bring food, supplies and sciences experiments to the International Space Station.