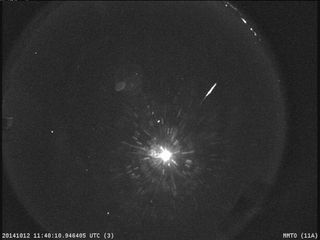 Some skywatchers captured incredible views of the Orionid meteor shower earlier this week, but even if you can't catch the peaking shower outside tonight (Oct. 21), you can still see it live online.

Representatives with the online Slooh Community Observatory are hoping to capture some amazing footage of the "shooting stars" during a webcast tonight (Oct. 21). You can watch the broadcast — which will feature views from telescopes in the Canary Islands and Arizona — live directly through Slooh (http://live.slooh.com/) starting at 8 p.m. EDT (0000 Oct. 22 GMT). Slooh experts will be available to discuss the science of the shower, and they have also set up a way for viewers to hear the ionization of the meteors as they streak through the atmosphere. You can also see the meteor shower webcast live on Space.com.

"The Orionids are usually the year’s third-richest meteor shower," Slooh astronomer Bob Berman said in a statement. "Not to mention that they zoom away from one of the best known and easily recognized constellations. But this year they’re particularly conspicuous because, unlike the August Perseids that unfolded under a full moon, and the December Geminids, which will also be diminished by moonlight during half the night, the moon will be totally absent for the 2014 Orionids. It should be quite a nice show." [See images of the Orionid meteor shower from 2013]

Astrophotographers around the world have already been burning the midnight oil to capture Orionid meteors on camera. For example, Tommy Eliassen captured a stunning view of an Orionid meteor with the northern lights dancing above Norway. Green curtains of light swirl above a campsite as the meteor streaks through the frame in the amazing image.

And photographer BG Boyd in Arizona drove away from city lights to see the cosmic show.

"I woke up at 2 a.m. and drove several miles outside of Tucson city limits and watched the meteor shower until sunrise," Boyd told Space.com via email. "I saw over a dozen during that period of time and captured these two."

The Orionid meteor shower happens annually when Earth passes through debris left behind by Halley's Comet. At its peak, the meteor shower should produce about 20 meteors per hour, according to NASA.

Editor's Note: If you snap an amazing picture of the Orionid meteor shower or any other night sky view that you'd like to share for a possible story or image gallery, send photos, comments and your name and location to managing editor Tariq Malik at spacephotos@space.com.