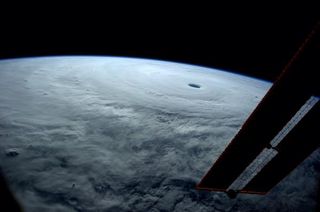 NASA astronaut Reid Wiseman captured this view of Typhoon Vongfong from space while he orbited the Earth aboard the International Space Station. He posted the image on Oct. 9, 2014.
(Image: © Reid Wiseman/NASA)

A NASA astronaut living and working on the International Space Station captured an incredible image of Typhoon Vongfong brewing in the Western Pacific.

NASA's Reid Wiseman released the photo — which shows the menacing looking eye of the storm — via Twitter on Oct. 9. Clouds stretch out from the center of the storm across the limb of Earth seen in the new image. The storm was classified as a "super typhoon," but its wind speeds have since decreased as it moved north.

NASA satellite data now shows that the typhoon's maximum sustained winds were blowing at 132 mph (213 k/h) earlier today (Oct. 10). Those wind speeds are expected to continue to decrease to 97.8 mph (157.4 k/h) by Sunday, according to forecasters at the Joint Typhoon Warning Center.

"The Joint Typhoon Warning Center expects Vongfong's center to pass just east of Okinawa on Saturday, Oct. 11, before turning to the northeast and changing to an extra-tropical cyclone over Japan," NASA officials said.

Vongfong qualifies as the most powerful typhoon since the deadly Super Typhoon Haiyan formed last year. Haiyan killed more than 6,000 people when in made landfall in the Philippians in 2013, according to NASA.

Another astronaut on the International Space Station at the time caught sight of the deadly Typhoon Haiyan in 2013. NASA's Karen Nyberg posted a photo of the typhoon in November 2013 on Twitter.