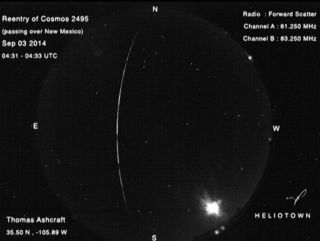 GOLDEN, Colorado - A global network of skywatching detectives has pieced together the strange story of a Russian military spy satellite that re-entered Earth's atmosphere earlier this month, the leftovers of which sparked a spectacular sky show over five U.S. states.

Observers across parts of Montana, South Dakota, Wyoming, Colorado and New Mexico caught sight of debris from the military satellite via a fireball on Sept. 2 around 10:30 p.m. Mountain Daylight Time, reporting their observations to the American Meteor Society.

The focus of attention is Russia's Cosmos 2495, an Earth-imaging reconnaissance satellite. It was a hefty spacecraft, in the Kobalt-M series, a family member of the Yantar chain of Russian satellites. Russia launched the satellite on its intelligence-gathering mission on May 6 of this year. [Photos: Declassified U.S. Spy Satellites]

The resulting fireball from parts of the Cosmos 2495 spysat's re-entry was not only spotted by skywatchers. It was also caught that night by a number of all-sky cameras, including the Cloudbait Observatory  here in the central Colorado Rocky Mountains.

An on-line buzz about the occurrence found a home at SeeSat-L, the mailing list for visual satellite observers, which has become an invaluable tool to study all manner of spacecraft events. So here's what happened with Cosmos 2495.

This multipart Cosmos 2495 consists of an equipment module, an instrument module, a camera re-entry vehicle and a large sun shade with additional antennae and sensors. It is designed to re-enter Earth's atmosphere so that its camera canister can be retrieved by a recovery crew.

At the end of its mission on Sept. 2, the Russian spysat fired its engine to begin its return to Earth. Its fiery re-entry was witnessed and videoed from a large part of western Kazakhstan. The module carrying the cargo of exposed film and a reusable camera separated, and is believed to have landed near the city of Orenburg in Russia. The remainder of the spacecraft, meanwhile, burned up as planned.

Now, it appears that the slow-moving fireball spotted over the U.S. on Sept. 2 — some 10 hours after Cosmos 2495's intelligence camera module had safely touched down — was due to a lingering leftover from the Soviet military spacecraft. [6 Biggest Spacecraft to Fall from Space]

"I believe that is the consensus now," said veteran spacecraft tracker Ted Molczan of Toronto, Canada, who maintains the SeeSat-L mailing list.

"Having spent much of the past two years cataloguing historical re-entry sightings, I was not surprised by these events," he added. "Of the 239 re-entries I have catalogued to date, this is the fifth case attributable to lost or un-catalogued objects that could be shown to correlate with a known parent or launch."

Like Molczan, other spacecraft trackers chimed in on the case of Cosmos 2495.

For example, astronomer Sergey Yefimov contributed very significantly to solving the mystery, Molczan recalls. On Sept. 3, Yefimov alerted Molczan to fireball sightings from western Kazakhstan and the Orenburg region of Russia, including videos that Yefimov suspected were of a satellite re-entry.

Satellite tracker Marco Langbroek pulled together a detailed assessment of Cosmos 2495, sharing his insights on SeeSat-L. He runs SatTrackCam Leiden, an amateur satellite tracking station at Leiden, the Netherlands.

The Cosmos 2495 saga offers several lessons to be learned in piecing together the whole story.

"Maybe that sometimes things are more complex than you think," Langbroek told Space.com. "And at the same time, that the reality turns out to be less spectacular and less unusual than the initial hypothesis."

In this case, Langbroek said, initial thoughts that Russia had botched a deliberate deorbit was not the case. Instead, American skywatchers saw the natural decay of spacecraft debris after the Russians had successfully re-entered the Cosmos 2495 camera return module.

What made the fireball?

Analysts have proposed that the fireball over the United States might have been satellite parts like solar panels and possibly antennas shed sometime before the Cosmos 2495 camera re-entry vehicle made it back to Earth in Russia. [5 Amazing Fireballs Caught on Video]

The observations from the United States suggest the fireball was created by a sizable object, Langbroek said, but what exactly re-entered over the U.S. remains unknown.

"Current suspicions are going towards the re-entering debris being solar panels," Langbroek said, adding that it was likely not one of the two other Kobalt-M modules: the propulsion module or the instrumentation module.

Langbroek said that another lesson from the Cosmos 2495 event is that it pays to do some historical research into similar occasions.

"In this case the production of debris surviving the camera re-entry vehiclereentry during earlier Kobalt-M missions," Langbroek said. He salutes another satellite detective, Igor Lissov, for bringing that data to the forefront.

Igor Lissov, editor of the trade journal Novosti Kosmonovatiki, told Space.com that it was "for sure" that a fragment of Cosmos 2495 detached before the satellite's deorbit burn and that could have accounted for the U.S. observations.

But what fragment of the spacecraft was large enough to be visible in its destruction dive over the U.S. is still an unknown, Lissov said.

While the piece of debris that re-entered over the U.S. was sizable, it represented a tiny fraction of Cosmos 2495, Molczan said. If it was one of the solar arrays, he said, then judging by conceptual drawings of the spacecraft, its dimensions were roughly 6 feet by 10 feet (2 by 3 meters).

"Taking into account its ballistic properties, estimated from its rate of descent from orbit, the corresponding mass would have been about 50 kilograms, or less than one percent of the mass of Cosmos 2495," Molczan said. That would have been "more than sufficient" to produce the light show seen from five states, over a 900-mile ground track (1,600 kilometers), he said.

According to Molczan, accurate observations were essential to the ability of the SeeSat-L community to get to the bottom of the Cosmos 2495 story.

"We are grateful to our fellow skywatchers in Kazakhstan, Russia and the U.S. who reported their personal observations and video of the fireballs, via space and astronomy forums, meteor reporting sites, and UFO reporting sites," Molczan said.

The case of Cosmos 2495 was "solved" quite quickly, Langbroek said, "and notably because various sleuths pooled and exchanged knowledge and opinions, both in public on SeeSat-L and in private by e-mail among a small group."

Leonard David has been reporting on the space industry for more than five decades. He is former director of research for the National Commission on Space and is co-author of Buzz Aldrin's book "Mission to Mars – My Vision for Space Exploration" published by National Geographic. Follow us @Spacedotcom, Facebook and Google+. Original article on Space.com.