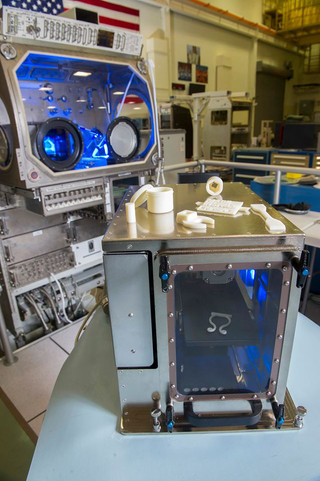 Made in Space's 3D printer will churn out the first 3D-printed tools on the International Space Station.
(Image: © Made in Space)

You don't have to become an astronaut to use the International Space Station's new 3D printer.

NASA has challenged students, ages 5 to 19, to design 3D-printed tools that could be made in microgravity.

The first 3D printer to fly in space arrived at the astronaut outpost last month aboard a SpaceX Dragon capsule. SpaceX delivered the machine along with more than 5,000 lbs. (2,268 kilograms) of cargo on its fourth resupply mission to the space station for NASA.

The printer was built by the California-based company Made in Space, which plans to create simple plastic parts at first, to test whether 3D printing is viable in the final frontier. Now, students will have a chance to take part in that experiment.

NASA and the American Society of Mechanical Engineers Foundation launched a set of "Future Engineers" 3D Space Challenges on Sept. 21. The contest asks students in grades K-12 to create and submit a digital 3D model of a tool that they think astronauts will need in space.

"As you know we don't have overnight shipping up in space, so when we really need something we have to wait," NASA astronaut Doug Wheelock, who spent six months living and working on the space station in 2010, said in a video announcing the challenge. "To be able to make parts on demand will forever change that for us."

Entries, which are due by Dec. 15, will be judged for their creativity, usefulness and adherence to design guidelines. Semifinalists will be announced in mid-January and the winners will be revealed on Jan. 30.

The grand prize for the winning teen entrant (ages 13 to 19) includes a trip to NASA's Payload Operations in Huntsville, Alabama, where the student will watch his or her print made live on the space station. The winner in the 5- to 12-year-old set will get a 3D printer for his or her school.

You can learn more about the contest and how to participate here: http://www.futureengineers.org/