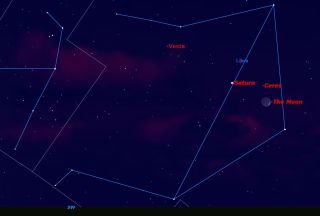 On Saturday evening (Sept. 27, 2014), about an hour after sunset, the thin crescent Moon will be just below the dwarf planet Ceres in Libra, with Saturn and the asteroid Vesta near by.
(Image: © Starry Night Software)

Libra is a constellation to which most skygazers rarely pay attention. Its brightest star, with the tongue-twisting name of Zubeneschamali, is barely third-magnitude, so it gets lost between the bright stars of Virgo to the west and Scorpius to the east. But this weekend Libra will shine.

Currently Libra is host to the planet Saturn and two of the largest and brightest asteroids, Ceres and Vesta. In addition, the crescent moon will be passing through on its monthly trip around the Earth.

Go out on Saturday night (Sept. 27) about an hour after sunset and look for the crescent moon, just three days removed from the new phase. You should be able to see the portion of the moon that's not sunlit glowing with the ghostly light reflected from Earth, which is called earthshine or earthlight. Binoculars will help you see this. [Amazing September Night Sky Photos by Stargazers]

Just above the moon is Ceres, the largest of the asteroids and recently reclassified as a dwarf planet. At 596 miles (959 kilometers) in diameter, Ceres is too small to show a disk in even the largest amateur telescopes, and at magnitude 8 will require binoculars to spot. A chart printed from your planetarium software will help you distinguish it from background stars.

Just to the left of the moon, Saturn is shining brightly at first magnitude and makes a gorgeous sight in even the smallest telescope. In addition to Saturn's famous rings, be sure to look for its bright moon Titan.

Further off to the left, use the stars in the chart to locate the protoplanet Vesta. At 318 miles (512 km) wide, it is half the size of Ceres, but actually shines one magnitude brighter because of its higher albedo.

Albedo is a measure of how much light an object reflects. Ceres has an albedo of 0.07, which means it reflects only 7 percent of incoming sunlight.,Vesta, on the other hand, has an albedo of 0.42 and thus Vesta appears brighter than Ceres despite its smaller size.

While checking out the moon and its companions Saturday night, be sure also to look a little farther to the left for a close encounter between Mars and the bright red star Antares. "Antares" means "rivalling Mars," which makes sense given the star's color.

On Saturday night, Mars will be four degrees above Antares and slightly brighter. (Your fist held at arm's length measures about 10 degrees across.) To see their colors more clearly, try looking at them with binoculars slightly out of focus.

By Sunday night (Sept. 28), the moon will have moved past all of the objects in Libra and will be about to enter the constellation Scorpius.

Although North American observers will miss out because the moon will be below the horizon, in other parts of the world there will be even further lunar action this weekend. The moon will occult Ceres as seen from Papua New Guinea and Polynesia, Saturn as seen from East Asia and Hawaii, and Vesta as seen from the Mediterranean basin.