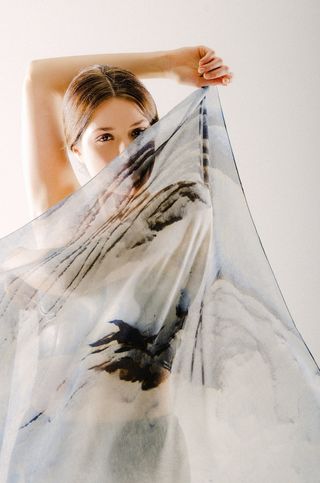 On this scarf is an image of exposed Martian rock layers, seen by the MRO Mars High Resolution Imaging Science Experiment in the Argyre Region.
(Image: © Slow Factory)

NEW YORK — Celine Semaan Vernon isn't a scientist or a fashion designer by training, but somehow she found herself at an unlikely nexus between those two careers.

Tonight (Sept. 10), Vernon will show off a line of silk scarves artfully printed with free-to-use, barely altered NASA images of Earth and space as part of New York Fashion Week. Her two-year-old boutique, Slow Factory, has already earned her fans among NASA scientists and space enthusiasts seeking to express their geekery with something more stylish — and precise — than polyester, gift-shop wares. Now, Vernon will try to impress the fashion world.

A longtime advocate of the open Web and Creative Commons, Vernon has consciously chosen to use only images in the public domain as the basis for her designs. For this latest line, some of her pieces bear images of dust devils lines and exposed rock layers taken by spacecraft like NASA's Mars Reconnaissance Orbiter. Her initial designs featured public domain space images from NASA's Goddard Space Flight Center, according to the fashion website Ecouterre.

Vernon took a few moments out of her Fashion Week preparations to talk to Space.com about the philosophy behind Slow Factory and tonight's show, dubbed "Slow Down." The following interview has been edited for clarity and brevity.

Celine Semaan Vernon: Different things happened at different times and eventually I connected the dots and I found my way doing space fashion. My work with Creative Commons for years has gotten me closer and closer to the NASA account. And ever since I was a child I wanted to become an astronaut, but I was very bad at science and math. I was very disappointed to know that to become an astronaut or a scientist you actually have to be good in these fields — I was more of an art student.

As an artist I wanted to find a way to make the intangible tangible. I decided to work with textile and fabric out of serendipity. I tweeted one day, "Wouldn't it be cool to see these images on silk," and I got such a cool response that I decided to find a way to do it. This whole work has been very much driven by the mantra "find a way" because I don't know anything about fashion — I don't have a specific education in it — and I'm not a scientist, either. I think I'm just a very curious person who's very enthusiastic.

Space.com: Why do you only use images licensed under Creative Commons?

CSV: My work with Creative Commons was very much about open knowledge and open data and giving back to community. I really am a strong believer of that philosophy, and I am a very big advocate of the open Web. Maybe this is why I stumbled into fashion because with fashion there is no copyright — everything is up for remix. This is how I see the world being innovative and culture being innovative. That's why having images be open and having some rights reserved as opposed to having all rights reserved allows people to be more creative and innovative and come up with creative concepts. If these images were not available, I would not have been able to do the kind of work I'm doing.

Space.com: Even if you only use Creative Commons images, that still leaves you with a lot of works to choose from. How do you pick which images to use in your designs?

CSV: By trade I'm a user-experience designer and information architect, so I'm very good at categorizing and organizing and labeling things when it comes time to come up with a concept or collection theme. When I come up with a theme, I start collecting, researching and gathering images and I narrow them down to a collection of four to six pieces — I haven't gone beyond a collection of six pieces yet. I think I'm like a DJ making a playlist, picking images that go well together.

Space.com: Do you take artistic license with the Creative Commons works or alter NASA's images before they appear on your clothes?

CSV: For the NASA collections, I don't change them at all. I tweak colors lightly just because we are printing on fabric. Sometimes you need to saturate the image because the fabric drinks all of the ink. That's mainly all I do because I want to keep them as is. But for the upcoming collection for the spring, I'm playing a lot with the images, creating collages, collaborations with different artists.

Space.com: On your website, you credit the satellites and telescopes and NASA centers where your images come from. Is it a priority to have your customers understand the origins of your designs? Do you want them to learn anything from browsing or buying your clothes?

CSV: Absolutely. There's a big part of it that's education and learning. It's not upfront, but when you receive an item, you get a little info card — the same kind of info cards in the '80s you used to get with the image on one side and all the scientific facts on the other side. Also on the website each image has the exact same scientific name as the one NASA has and a link to that site. I try to create a connection between these pieces and where they come from and what are they made of.

Space.com: Have you gotten any feedback from NASA or any of the scientists involved in creating the images you use?

CSV: Amy Mainzer, who is the astronomer who discovered the Witch Head nebula, she actually reached out to me from NASA and said, "I'm the one who discovered that nebula!" and I practically fell off my chair. I sent her a scarf and she loved it. Then I conducted a short interview with her where we talked about design and art and science and how they are very close together — at their core, they are all about curiosity and the desire to learn about the world. Then she put me in touch with other astrophysicists who discovered the other images we were printing. We have a very beautiful connection with NASA, I think, where they reach out to me every time I launch something. And I send a lot of scarves there.

Space.com: Most of the items in your collections are made from silk. Was that a conscious choice?

CSV: It was a very philosophical choice because these images are so beautiful and amazing and I didn't want to print them on polyester. Being aware of how you print things and how you manufacture things was very important to me. I did not want to print these images on something that was going to pollute the Earth or hurt the Earth. All of these scarves are made with 90 percent less water than any other printing technique. So we are very conscious about how we create these things and their environmental footprint.

Space.com: What can you tell us about your new "Mars, Revealed" collection?

CSV: "Mars, Revealed" soft-launched on the second anniversary of when Curiosity landed on Mars, which also happened to be our second anniversary, out of coincidence. Whenever I show these images [of Mars] to people without giving them any context, they're like, "Whoa! Where is that? Is that on Earth?" and it's very interesting because the landscapes are Earthlike but there is an otherworldly experience to them. I wanted to create a familiarity with this planet because we've always been fascinated with Mars — it has an inspired a series of movies and books and all sorts of things. I thought, "What if we could wrap ourselves with this mysterious planet and actually look closely at it?" It's extremely fascinating to be able to look closely at it.

Space.com: Is this the first time you're participating in New York's Fashion Week? What can we expect to happen at the Slow Down event?

CSV: Yes, I have no idea how I ended up here! It's definitely going to be more like an art installation than a fashion show. It's going to have sound and video and lights in a way to create this atmosphere as though we were floating in space. I like to imagine Slow Factory as a satellite factory floating in space and capturing images. [The show] is definitely trying to recreate that mood and trying to offer an experience that allows people to slow down and look at the big picture.

Space.com: Besides the praise you've gotten from NASA and scientists, have you gotten any feedback from big names in the fashion world?

CSV: I get a lot of recognition from the geeks out there — I love you geeks! I am also a geek — but the fashion world is a little harder to get into. They're like the cool kids at school. They don't necessarily like you right away, but maybe eventually I will win their hearts.

I think in the fashion world it takes a while for people to trust where you come from and what you're doing. They want to see at least a few collections out of you before they decide whether or not you're part of the group. If not this year, I'm pretty sure eventually down the line I'm going to have a little space in fashion, because I think with wearable technology and all of that stuff, science has come very, very close to fashion. I'm not the first one connecting the dots here. I think eventually I will find my space.