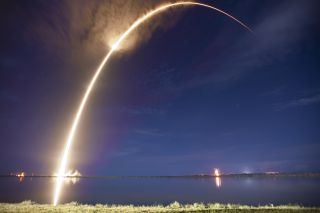 A SpaceX Falcon 9 rocket streaks across the night sky on Sept. 7, 2014 in this long-exposure view of the AsiaSat 6 satellite launch from Cape Canaveral Air Force Station in Florida.
(Image: © SpaceX)

The launch was originally scheduled for Aug. 26, but SpaceX pushed it back to give engineers time to investigate the self-destruction of its Falcon 9 Reusable (F9R) rocket during an Aug. 22 flight test in Texas.

SpaceX's F9R rocket prototype is quite different than the company's operational Falcon 9 booster, so the mishap did not raise any specific red flags about SpaceX's commercial liftoffs, company representatives said. But SpaceX wanted to do a thorough check of its launch systems regardless, to make sure all is well.

"What we do want to triple-check is whether even highly improbable corner case scenarios have the optimal fault detection and recovery logic," SpaceX founder and CEO Elon Musk said in a statement late last month.

Sunday's launch appeared to go off without a hitch, with SpaceX declaring the mission a success about 30 minutes after liftoff.

"Launch Success! At 1am ET, Falcon 9 lifted off carrying the AsiaSat 6 satellite." SpaceX representatives wrote in a Twitter update. "Contact [with] satellite is confirmed."

AsiaSat 6, which was built by California-based firm Space Systems/Loral, will distribute broadband and video service throughout the Asia-Pacific region. It has a design life of 15 years. AsiaSat is sharing half of AsiaSat 6's communications capacity with Thailand satellite communications company Thaicom, which has named its part of the satellite Thaicom-7.

"The launch of Thaicom-7 is a great success," said Thaicom CEO Suphajee Suthumpun in a statement. "I would like to thank our partners and team for a job well done. Our new bird will help fulfill the increasing demand in satellite capacity in Thailand and in the Asia Pacific region."

Sunday's liftoff marked the second time in a month that SpaceX delivered a payload for AsiaSat. A Falcon 9 rocket launched the AsiaSat 8 satellite into orbit on Aug. 5.

"This year marks a major milestone for AsiaSat," said AsiaSat President and CEO William Wade in a statement. "The addition of AsiaSat 6 to AsiaSat’s expanding fleet of five in-orbit satellites including the new AsiaSat 8 significantly enhances our capability to offer a wider range of transponder capacity to our clients."

SpaceX has managed to bring the first stage of a Falcon 9 back to Earth for a soft ocean splashdown twice this year during successful satellite launches. No such attempts were made during either AsiaSat launch, however.

SpaceX's work with the F9R is part of an effort to develop fully and rapidly reusable launch systems, a key priority for the company. Such technology could slash the cost of spaceflight by a factor of 100, Musk has said.

Next up for SpaceX is the Sept. 19 launch of the company's Dragon capsule on an unmanned cargo run to the International Space Station for NASA. SpaceX holds a $1.6 billion deal with the space agency to fly 12 such missions and has already completed three of those flights.