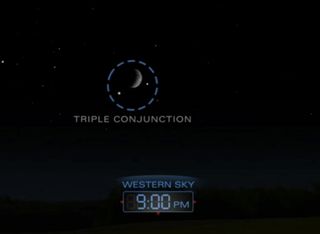 The moon, Saturn and Mars meet up in the evening sky about an hour after sunset on Aug. 31, 2014.
(Image: © : Space Telescope Science Institute, Office of Public Outreach)

Look up this Labor Day weekend to see a lovely celestial tableau in the southwestern part of the evening sky.

About an hour after sunset on Sunday (Aug. 31), skywatchers should be able to see three cosmic bodies gathered together for the final days of summer, if weather permits. Intrepid observers will immediately notice the moon, appearing as a wide crescent phase. Two bright "stars" will also appear, flanking the moon. One will shine with a yellowish-white tint off to the satellite's right and another shining with a yellow-orange color below and a bit to the moon's left.

The yellowish-white object to the moon's right is the planet Saturn, while the one below and slightly to the moon's left is Mars. [Best Stargazing Events of September (Sky Maps)]

In April, Mars was 57.6 million miles (92.7 million kilometers) away from Earth, the Red Planet's closest pass with Earth for the year. At that time, Mars' brightness rivaled that of the star Sirius (the brightest star in the sky). Now, however, Mars has receded to a distance of 127 million miles (204 million km) and shines only about one-seventh as bright as it did in April. Still is a conspicuous object, however, Mars ranks among the top 10 brightest stars. But as Earth continues to move away from the Red Planet, Mars will gradually fade.

The other planet joining the moon, Saturn, is famous for its spectacular ring system, and if you have a telescope then Sunday might just be your night to spot the rings. Use the moon as a benchmark. Just point your telescope to that bright, starlike object just off to the right of the moon, and there you will find the ringed beauty. Right now, the north face of the rings is spectacularly tilted 21.5 degrees toward Earth.

Don't bother pointing a telescope toward Mars, however. July was the last month that the Red Planet showed more than a few traces of surface features in medium-size telescopes on good nights. Now, even in moderately large scopes, the planet appears as just a tiny, featureless dot of yellow-orange light.

The moon is always a wonderful sight to see through binoculars and telescopes. Scan especially along the line separating dark and light (the terminator) to catch a view of shadowed craters and mountains appearing in high relief.

Editor's Note: If you take a photo of the moon, Saturn and Mars this weekend or have any other amazing skywatching photo you'd like to share for a possible story or image gallery, please contact managing editor Tariq Malik at spacephotos@space.com.