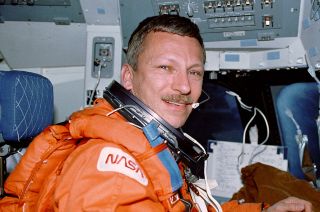 Steven Nagel died after a long battle with cancer, the Association of Space Explorers stated on Facebook. The international organization, to which Nagel belonged, includes more than 350 men and women who have flown in space.

Nagel joined the astronaut corps in 1978 with NASA's first group of trainees selected for the space shuttle program. Although he was chosen to pilot the orbiter, his first flight was as a mission specialist, a position generally assigned to scientists and engineers.

"I really wanted to fly as a pilot, so at the time — because there was no explanation that went with it — I wondered, 'Are they telling me I'm not good enough to fly as a pilot?'" Nagel told a NASA interviewer about his 1985 assignment to the shuttle Discovery's STS-51G crew. "Nothing against mission specialists. I would trade my pilot's slot to go be a mission specialist and do a [spacewalk], certainly, but it's just that 'What are they trying to tell me here?'"

"But I think what it really was, our class was very large, and they're getting down to the point where I think [they] probably wanted to get us all flown, and this was a way to do it a little quicker," Nagel recalled. [7 Space Shuttle Astronaut Firsts]

Nagel's first week in Earth orbit included helping to deploy three communications satellites for AT&T, Mexico and the Arab Satellite Communications Organization, as well as a free-flying platform devoted to astronomy experiments and an experiment for the Department of Defense's Strategic Defense Initiative (colloquially known as "Star Wars").

In the pilot seat

Nagel's turn in the pilot seat came on his second flight.

Nagel launched in late October 1985 as part of the eight-member STS-61A crew onboard space shuttle Challenger. The week-long flight, which set the still-standing record for the most people to have launched and landed on the same spacecraft, was also the first shuttle mission to be funded and directed by another nation: the former West Germany, overseeing the European-built Spacelab module mounted in Challenger's payload bay.

"Not having a U.S. manager made it more complex, but I see that mission was kind of an early lead-in to the space station," Nagel told a NASA interviewer in 2002. "Maybe in a way a Spacelab is kind of like a mini space station. You are doing scientific work, but your space station is inside the shuttle, and you're up there, in our case, a week."

As the mission's pilot, Nagel did not have much to do with 75 experiments being conducted inside the Spacelab, but that left time for observing the planet below.

"Jokingly, I said all I did on the second mission was purge fuel cells, dump water, take pictures, and prepare meals for the crew. I had no responsibility for any experiments in the back, so we were helping them out as much as we could," Nagel told a NASA interviewer in 2002.

"The orbiter crew had time to look out the window," Nagel noted. "So it was just a bonanza of Earth observations. It was great."

The STS-61A mission was the last successful flight of the shuttle Challenger before the orbiter and its 51L mission's crew was lost in flight in January 1986. Nagel watched the ill-fated launch from a conference room at Johnson Space Center in Houston, but he was promptly sent to Florida to assist with the recovery of the shuttle's debris.

He then represented the Astronaut Office in NASA's effort to develop a crew escape system to improve the safety of the orbiters. Initially, the idea was to use a rocket-powered extraction method but ultimately a simpler extendable pole was adopted.

"This was my best time at NASA, actually," Nagel stated. "Nothing I ever did was more fulfilling than that two years, to be honest, even flying."

"This was better, because everybody was so focused on getting the shuttle flying again," he remarked.

The shuttle was returned to flight in 1988, and three years later, Nagel followed as the commander of Atlantis' STS-37 crew. The six-day mission was charged with deploying the Compton Gamma Ray Observatory (GRO), the second of NASA's "Great Observatories," which also included the Hubble Space Telescope.

"The GRO was big," Nagel said. "It was not physically as long as the Hubble, but it weighed a lot more. It was a lot denser. It was a great big thing, about 35,000 pounds, and it had three appendages that had to unfold once you get it out in the end of the [shuttle's robotic] arm."

The first two of those appendages, the solar array wings, extended slowly one at a time. The third however, failed to move. To fix the problem, crew members Jerry Ross and Jay Apt were sent outside on a spacewalk.

"That was the first — what would you call it? Unscheduled EVA," Nagel said. "It was planned as a contingency, but it was certainly not on the schedule. It was successful."

Nagel's fourth and final launch in April 1993 got off to a late start. Already delayed from February due to technical concerns, the shuttle Columbia's three main engines shut down at just T-3 seconds prior to liftoff as a result a valve leak on March 22. The abort postponed the flight another month as all three engines were replaced.

Once in space, Nagel and his STS-55 mission crewmates conducted experiments as part of the second German-led Spacelab flight. They also became on-orbit plumbers.

"'You've got to stop using the toilet.' Sounds funny on the ground. For real, this is, there was nothing life-threatening about it, but it could be mission-threatening. If you cannot get this problem resolved, you're coming home. And what a tragedy that would be for the millions of dollars invested in this mission," Nagel told a NASA interviewer.

A nitrogen leak had disabled the system used to flush the waste water from the toilet. So Nagel and his crew had to divert the water from its tank into a contingency bag.

"Periodically we'd have to empty the bag," Nagel recalled. "You dump the water overboard out a port on the side of the orbiter ... except instead of gas pressure to dump, one of us would have to squeeze the bag to dump the waste water."

"It got us through the mission," Nagel continued. "So who argues with success?"

Overall, the mission was a success. Over the course of the ten days, the flight logged the 365th day in space for the shuttle fleet and 100th day in orbit for Columbia. With the landing, Nagel had spent a total of 30 days, 1 hour and 34 minutes in space.

Continue reading at collectSPACE about astronaut Steven Nagel’s life before and after his four space shuttle missions.