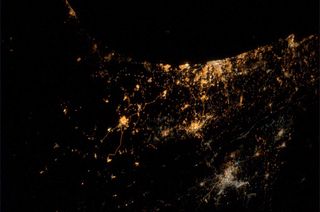 European Space Agency astronaut Alexander Gerst captured this photo of rockets and explosions in the Gaza Strip and Israel on July 23, 2014. The image was the "astronaut's saddest photo" yet from space.
(Image: © Alexander Gerst/@Astro_Alex via Twitter)

Editor's update for July 25: Astronaut Alexander Gerst has written a blog post from space about his grief on seeing conflicts on Earth from space. For the full story, read: Astronaut's View on Israel-Gaza Conflict: No Borders Visible from Space.

As fighting continues in Israel and Gaza, astronauts living aboard the International Space Station can see signs of the deadly conflict from space.

Alexander Gerst, a German astronaut with the European Space Agency, posted photos online Wednesday (July 23) showing Israel and the Gaza Strip alongside a grim caption. The astronaut's view of rockets over Gaza and Israel from space served as a stark reminder of the unrest on Earth, despite the planet's beauty from space.

"My saddest photo yet. From the International Space Station we can actually see explosions and rockets flying over Gaza and Israel," Gerst wrote on Facebook and Twitter underneath two nighttime views of the region.

Israeli troops and Hamas militants have been embroiled in conflict for more than two weeks, exchanging heavy fire that has left 680 Palestinians and 34 Israelis dead so far, according to the Associated Press. U.S. Secretary of State John Kerry and U.N. Secretary-General Ban Ki-moon went to Jerusalem in an attempt to help broker a ceasefire, but as of Wednesday afternoon, no such deal had been struck.

"We have certainly made some steps forward and there's still work to be done," Kerry said in remarks today before his meeting with Ban.

For all their risky and difficult work, the astronauts living on the space station are rewarded with a rare view of the planet. They see neon green auroras hovering over the curvature of Earth and the floodlit veins of big cities at night. But not every vista inspires wonder and appreciation, and Gerst is hardly the first astronaut whose view has been tarnished by destruction, both natural and manmade, on the ground.

On Sept. 11, 2001, NASA astronaut Frank Culbertson captured a photo of a plume of smoke billowing from the World Trade Center after two hijacked planes crashed into New York City's twin towers. From an altitude of 220 miles (350 kilometers), Expedition 26 astronauts could see the lingering floodwaters from the devastating tsunami that swept over Japan on March 11, 2011, after a huge 9.0-magnitude earthquake. Another group of astronauts aboard the space station photographed the damage and flatted buildings in Port-au-Prince in the days after a massive earthquake struck Haiti on Jan. 12, 2010.