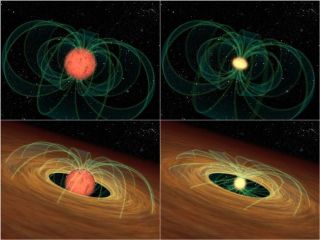 A developing star is collapsing onto itself at top-left in this artist's conception. As it shrinks, the star spins faster and faster, like a skater folding in his or her arms. Green lines represent magnetic fields. Leftover material forms a flat disk, in which the magnetic field gets bogged down.
(Image: © NASA/JPL-Caltech/R. Hurt (SSC))

Young stars are loaded with energy, and they can spin around in half a day or less, compared to the 28 days it takes our more mature Sun to make a revolution.

But young stars would spin even faster if something didn't hold them back.

Now scientists say they think they've figured out at least one thing that slows them down: disks of planet-forming gas and dust, just as had been long suspected.

Nearly out of control

Stars collapse from clouds of gas and dust. As they contract, they spin faster and faster, like a twirling ice skater pulling her arms in. Leftover gas and dust flattens out into a disk, and the material in it can clump together to form planets.

Developing stars spin so fast that, left unchecked, they would never fully contract and become stars. A disk tugs at a star's magnetic field, something like a spoon moving through molasses, the researchers said.

The support for this scenario, announced today, is based on new observations from NASA's Spitzer Space Telescope, which found that slow-spinning stars are five times as likely to have a disk as fast spinners.

"We can now say that disks play some kind of role in slowing down stars in at least one region, but there could be a host of other factors operating in tandem," said study leader Luisa Rebull of NASA's Spitzer Science Center. "And stars might behave differently in different environments."

Other factors that contribute to a star's winding down over longer periods of time include stellar winds and possibly full-grown planets.

So do stars with planets spin more slowly than stars without planets? Not necessarily, Rebull explained. Slowly spinning stars might simply take more time than other stars to clear their disks and develop planets. Such late-blooming stars would, in effect, give their disks more time to put on the brakes and slow them down.

More insight will have to wait until more planets around other stars of varying ages and speeds are discovered.

The research was detailed in the July 20 issue of the Astrophysical Journal. The Spitzer Science Center compares the spin of stars to a skater in this video about the new findings.