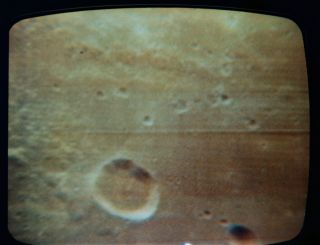 This close-up (full zoom) view of the Sea of Fertility is seen, in this color reproduction taken from the fourth television transmission, from the Apollo 11 spacecraft during its second revolution of the moon on July 19, 1969. This live TV broadcast from the moon was made by Apollo 11 astronauts Neil Armstrong, Buzz Aldrin and Michael Collins.
(Image: © NASA)

Click unmute on the video above hear mission audio from Flight Day 3 of the Apollo 11 mission and listen to over 50 minutes of audio in the video from NASA below.

This summer marks the 50th anniversary of NASA’s Apollo 11 mission. Fifty years ago today (July 19), the Apollo 11 crew were able to view the lunar surface up close from the spacecraft. The astronauts spent the day preparing for the lunar landing which was scheduled for the very next day. Here’s how it happened.

Astronauts on the Apollo 11 crew started their day early, at 6:58 a.m. EDT, when they called Mission Control to ask about a scheduled course correction to set their docked spacecraft on the first journey to the surface of the moon.

In response, controllers advised the men that the maneuver had been canceled and also told them they could go back to sleep. The crew of Neil Armstrong (commander), Michael Collins (command module pilot) and Buzz Aldrin (lunar module pilot) then received a signal at 8:32 a.m. to start the day.

Following a report of the day's news (which was heavily focused on the moon landing) and housekeeping chores, Collins told Mission Control of the view out the window.

"The view of the moon that we've been having recently is really spectacular," Armstrong said. "It fills about three-quarters of the hatch window and, of course, we can see the entire circumference, even though part of it is in complete shadow, and part of it's in earthshine. It's a view worth the price of the trip."

At 1:55 p.m., Armstrong radioed back what the crew could see. "It looks very much like the pictures, but like the difference between watching a real football game and watching it on TV-no substitute for actually being here."

Later that day, the Apollo 11 crew performed a scheduled television broadcast, fired their engines again to make their orbit more circular, and did another checkout of Eagle. The landing was scheduled for the next day, July 20.

Editor's note: This feature, originally posted in 2014, has been updated for the 50th anniversary of the Apollo 11 mission.  Space.com contributor Chelsea Gohd contributed to this report.