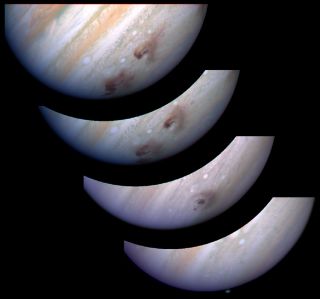 Over time, Jupiter sucked up the fragments of the comet Shoemaker–Levy 9, which crashed into the planet in 1994.
(Image: © JPL/NASA/STScI)

Twenty years ago this week, humans for the first time witnessed a collision between two bodies in the solar system.

From July 16 to 22, 1994, more than 20 fragments of the comet Shoemaker-Levy 9 pelted Jupiter's atmosphere. The weeklong fireworks show left scars that could be seen for months by people on Earth with the aid small telescopes. Some of these gashes were even more visible than the Great Red Spot, a swirling hurricane in Jupiter's atmosphere that's nearly three times the size of Earth in diameter.

NASA's fleet of space telescopes and probes at the time were tapped to document the historic collision. The Galileo spacecraft, which was on a mission to study Jupiter, wouldn't arrive in the Jovian system for another year and a half. But the probe still snapped images of fireballs shooting from the gas giant's southern hemisphere. [Comet Shoemaker-Levy 9's Epic Jupiter Crash in Pictures]

The telescopes of NASA's Deep Space Network looked for disturbances in radio emissions from Jupiter's radiation belt. The crash and its aftermath were also studied with the Hubble Space Telescope, the solar-orbiting Ulysses spacecraft, and Voyager 2 (long before it became the first man-made object to leave the solar system altogether).

Shoemaker-Levy 9 was discovered a little more than a year before its demise, in March 1993. Husband-and-wife astronomers Carolyn and Eugene Shoemaker and amateur astronomer David Levy first spotted the comet while comparing two film frames taken with a camera at the California Institute of Technology's Palomar Observatory. Scientists believe the comet was pulled into orbit around Jupiter decades before it finally succumbed to the immense gravity of the solar system's biggest planet.

Congress also authorized NASA to hunt for near-Earth objects (NEOs). Eventually, the space agency formed its NEO Program Office, which coordinates efforts to detect, monitor and study potentially hazardous asteroids and comets that could pose a threat to Earth, NASA officials said in a statement.