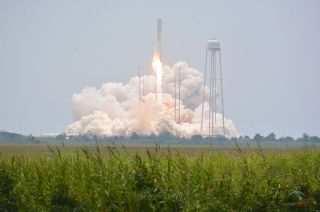 WALLOPS ISLAND, Va. — Astronaut Janice Voss never flew to the International Space Station. But in her memory, her name is making the trip on a spacecraft christened in her honor.

Orbital Sciences launched the SpaceShip Janice Vosson Sunday afternoon (July 13) from a pad at NASA's Wallops Flight Facility in Virginia. The unmanned cargo freighter is set to arrive at the space station on Wednesday.

"Janice was a friend of many of us, both in the Orbital and NASA communities," said Frank Culbertson, Orbital's vice president and a former NASA astronaut, about Voss, who worked for Orbital as an engineer before flying five times as a NASA space shuttle mission specialist. "We wanted to honor her and her family by naming this spacecraft for [her]. We think it is a fitting tribute to a really fine engineer and outstanding astronaut." [Gallery: Orbital Sciences' Orb-2 Cygnus Mission in Photos]

Voss died in February 2012, succumbing to breast cancer at the age of 55.

The SS Janice Voss is Orbital's second of eight Cygnus cargo ships to fly under a $1.9 billion contract with NASA to resupply the space station. It is delivering 3,669 pounds (1,664 kilograms) of experiments, support equipment and crew provisions, including 60 containers of food to restock the station's pantry.

"We carry a variety of cargo aboard, which includes food and basic supplies for the crew, and also the research," Culbertson told collectSPACE.com. "If we're going to keep six people up there [on the space station], we need a routine of regular delivery of cargo and that is what we're trying to establish with this service."

The 12:52 p.m. EDT (1752 GMT) launch of the SS Janice Voss came on the 5,001st day the space station had been continuously crewed. The Cygnus ship flew atop Orbital's two-stage Antares rocket from Pad 0A at the Mid-Atlantic Regional Spaceport (MARS) located at Wallops.

The Antares soared smoothly into the summer hazy skies over Virginia, powered by two engines originally built for the Soviet Union's failed moon rocket, the N1 booster. The mission, referred to as Orb-2, had experienced a number of delays for several reasons, the latest being the failure of one of the U.S.-modified Russian-legacy engines during a separate test firing.

"It has been a little bit of a challenge to get to this point, there have been a number of issues," Culbertson stated. "We started back in May with an anticipated launch date, which moved because of issues with other launch ranges and launch vehicles. We then moved into June and had to delay to work some technical issues."

Now in orbit, the Janice Voss will spend the next several days catching up the space station before arriving in the vicinity of the sprawling complex on Wednesday morning. There, the freighter will be captured by commander Steve Swanson with the assistance of flight engineer Alexander Gerst using the station's robotic arm and then attached to the Earth-facing port on the outpost's Harmony module.

The Cygnus is expected to stay berthed to the station for about a month, while the astronauts and cosmonauts work to unpack its supplies and then repack it with refuse and spent equipment to be destroyed upon its fiery re-entry into the Earth's atmosphere.

In addition to the provisions for the crew, the cargo ship is also delivering 32 CubeSat small satellites to be deployed out of the station's Japanese airlock and a host of student research as part of "Charlie Brown," an educational effort named for the Apollo 10 spacecraft that helped to set the stage for the first moon landing 45 years ago.

The arrival of the Janice Voss will mark the third time an Orbital spacecraft has been at the station. In September 2013, the company launched its first Cygnus, the SS G. David Low, on a successful demo to the outpost. Orbital's first contracted mission, completed by the SS C. Gordon Fullerton, followed in January of this year.

Like the Janice Voss, both previous ships were named for NASA astronauts who either worked for or helped support Orbital's activities. Each spaceship has carried a photo of its namesake to later be returned to Earth for display.

Click through to collectSPACE.comto see the Orb-2 mission patch, including its symbolic tribute to the mission’s Cygnus namesake, astronaut Janice Voss.