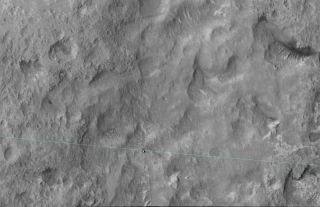 This image taken on June 27, 2014 by NASA's Mars Reconnaissance Orbiter shows NASA's Curiosity Mars rover on the rover's landing-ellipse boundary, which is superimposed on the image. The ellipse measures approximately 4 miles wide by 12 miles long.
(Image: © NASA/JPL-Caltech/Univ. of Arizona )

NASA's Mars rover Curiosity has entered a new realm on the Red Planet.

The 1-ton Curiosity rover has now cruised out of its landing ellipse, the area — about 4 miles wide by 12 miles long (7 by 20 kilometers) — regarded as safe ground for its August 2012 touchdown within Mars' huge Gale Crater, NASA officials said.

Indeed, a photo taken by the space agency's Mars Reconnaissance Orbiter on June 27 shows Curiosity right on this boundary, which encloses a region of relatively flat and smooth terrain.

Curiosity landed with the aid of a rocket-powered sky crane, which lowered the six-wheeled robot down softly on cables before flying off to crash-land intentionally a safe distance away. This system, which had never been used before at Mars, allowed Curiosity to land with much more precision than previous Red Planet missions had been able to achieve.

Curiosity left Yellowknife Bay last July and is now headed for the foothills of Mount Sharp, a 3.4-mile-high (5.5 km) in the middle of Gale Crater. Mission scientists want the robot to climb up through these foothills, which hold clues about how how the Red Planet's environment has changed over the eons.

Mount Sharp's base lies about 5 miles (8 km) from Yellowknife Bay. The rover still has to cover a bit more than 2 miles (3.2 km) to get there.