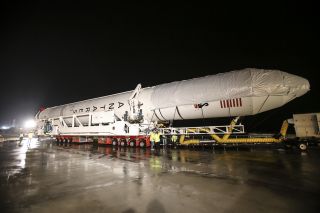 An Antares rocket built by Orbital Sciences Corp. rolls out to its launch pad at NASA's Wallops Flight Facility on Wallops Island, Virginia, on July 10, 2014 ahead of a planned July 13 launch. The mission will launch Orbital's unmanned Cygnus cargo ship to the International Space Station to delivery supplies for NASA.
(Image: © Orbital Sciences Corp.)

Packed with experiments and astronaut supplies, Orbital's robotic Cygnus spacecraft had been scheduled to blast off atop an Antares rocket here on Saturday afternoon (July 12). Now the capsule is set to launch Sunday (July 13) at 12:52 p.m. EDT (1652 GMT) from a seaside pad at NASA's Wallops Flight Facility on Wallops Island, Virginia.

The so-called Orb-2 mission has been repeatedly delayed this week because thunderstorms and severe weather in the area interrupted the launch team's normal operational schedule, NASA officials said. Cygnus originally had been expected to launch in June, but the mission was postponed after an AJ-26 engine used to power the Antares rocket malfunctioned during a ground test.

Now if all goes well, Cygnus will arrive Tuesday morning (July 15) at the space station, where astronauts will grapple the silver cylindrical vessel using a huge robotic arm attached to the orbiting lab, according to NASA. Alexander Gerst, a German astronaut with the European Space Agency who is currently living on board the space station, posted pictures to Twitter this morning as he performed his first practice grapple with the giant arm.

"A big moment in an astro's life: after 100s of sims, moving the real #ISS robotic arm for the 1st time. Felt great!" Gerst wrote in a tweet.

Cygnus is carrying 3,293 lbs. (1,493.8 kilograms) of cargo, including astronaut food, hardware, science experiments and a flock of small Earth-watching satellites made by the startup Planet Labs. The disposable vessel will remain attached to the space station for about 30 days before it is filled with trash and sent to burn up in Earth's atmosphere.

Sunday's flight will be Orbital Sciences' second cargo mission to the space station. The Dulles, Virginia-based company has a $1.9-billion contract with NASA to carry out eight resupply missions in all. Billionaire Elon Musk's private spaceflight company SpaceX also has a deal with NASA, worth $1.6 billion, to fly 12 missions to the orbiting lab using its Dragon spacecraft and Falcon 9 rockets. So far, SpaceX, which is based in Hawthorne, California, has completed three of those flights.