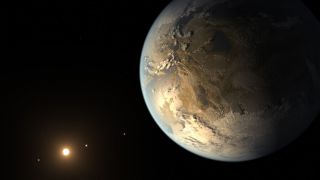 Kepler-186f, the first Earth-size planet orbiting in the habitable zone of its star, is just one of the many potentially habitable planets in the Milky Way galaxy.
(Image: © NASA Ames/SETI Institute/JPL-Caltech)

Three astrophysicists will discuss the latest exciting discoveries in the field of exoplanet science Wednesday (July 9), and you can follow along live online — and ask questions if you so desire.

The 30-minute webcast, which is called "Spotlight Live: The Hunt for Other Worlds Heats Up," begins at 3:00 p.m. EDT (1900 GMT) Wednesday. You can watch it live here on Space.com, courtesy of the nonprofit Kavli Foundation, which is hosting the discussion.

The researchers participating in the conversation are Zachory Berta-Thompson, a planet hunter at the MIT Kavli Institute for Astrophysics and Space Research; Bruce Macintosh of Stanford University, the principal investigator for the Gemini Planet Imager instrument, which takes direct pictures of alien worlds; and Marie-Eve Naud, a PhD student at the University of Montreal who led a recent study that discovered a strange gas giant exoplanet called GU Pisces b.

If you have questions for the scientists, you can submit them before or during the webcast via email to info@kavlifoundation.org. Or you can use the hashtag #KavliLive on Google+ or Twitter.

Astronomers first discovered a planet beyond our own solar system just two decades ago, in 1992. The tally of known exoplanets now tops 1,700, more than half of which have been discovered by NASA's Kepler space telescope. While researchers have found a number of exoplanets that orbit in their host star's "habitable zone" — the range of distances that could allow liquid water to exist on a world's surface — they are still looking for the first true "alien Earth."