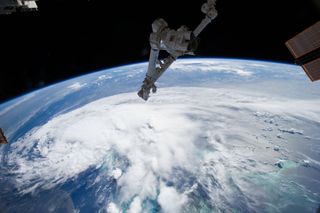 Crewmembers aboard the International Space Station took this photo of Tropical Storm Arthur moving off the coast of Florida on July 2, 2014.
(Image: © NASA )

A stunning photo snapped by astronauts aboard the International Space Station shows Hurricane Arthur churning off the coast of Florida, heading north.

The image, taken on Wednesday morning (July 2) by a crewmember of the orbiting lab's current Expedition 40, actually captures Arthur when it was still classified as a tropical storm. (Arthur strengthened to hurricane status early Thursday.)

"Surrounded by bright green waters, the Bahamas Islands are south of the storm in the lower right corner of the photo," NASA officials wrote in a description of the picture. "The U.S. coastline stretches along the left side of the photo."

Robotic eyes are keeping tabs on Arthur from orbit as well. NASA's Aqua satellite took a picture on Wednesday afternoon as it passed over the storm, for example, revealing that Arthur's eye was still covered by clouds at the time.

Aqua has also been gathering data on Arthur in infrared light. One infrared image captured Thursday (July 3) shows thunderstorms around the storm's center with temperatures around minus 63 degrees Fahrenheit (minus 53 degrees Celsius), NASA officials said.

Arthur is the first tropical storm of the 2014 Atlantic hurricane season. It took shape off southern Florida on Tuesday (July 1) and is currently heading north off the East Coast.

As of Thursday afternoon, Arthur was about 70 miles (113 kilometers) south-southwest of Cape Fear, North Carolina and featured maximum sustained winds of 90 mph (150 km/h). The National Hurricane Center (NHC), which is run by the U.S. National Weather Service, has issued a hurricane warning for areas from Surf City, North Carolina north to the Virginia border.

Arthur will likely come close to North Carolina's Outer Banks later Thursday and early Friday (July 4) but should then turn to the northeast, forecasters say.

The storm is expected to be a Category 2 hurricane when it passes over or near the North Carolina coast, NHC officials said in an advisory Thursday. (Meteorologists classify hurricanes based on wind speed from Category 1, the weakest, to Category 5, the most powerful.) But Arthur should begin weakening Friday night and will likely be downgraded to a "post-tropical cyclone" on Saturday (July 5), they added.