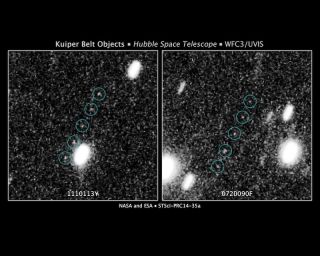 NASA's New Horizons spacecraft is hurtling through the outer solar system on a path to visit Pluto next July. But this summer, scientists are trying to figure out where to send the far-flung probe after its dwarf-planet flyby — and they've already found some promising leads.

After a successful pilot survey, scientists with NASA's New Horizons mission were granted extra observing time with the powerful Hubble Space Telescope to hunt for a target in the mysterious Kuiper Belt, a debris field of icy bodies orbiting the sun beyond Neptune.

Hubble officials said the telescope will begin its extended search for suitable Kuiper Belt objects, or KBOs, in July and finish in August, scanning a field of view about the size of the full moon. If a target is found and NASA officials approve, the path of New Horizons can be modified in the fall of 2015 to rendezvous with the KBO three to four years later.

Today, scientists have catalogued some 1,000 Kuiper Belt objects, but they think millions more asteroids, comets and dwarf planets await discovery in the region. It's not easy to find KBOs; Hubble can only identify these objects as they move against the background of distant starlight.

Hubble performed its pilot search for a target in the Kuiper Belt from June 16 to June 26. The telescope trained its gaze on 20 areas in a patch of the sky in the constellation Sagittarius, producing some 200 images. Scientists with the $700 million New Horizons mission pored over the data and found two KBOs, both estimated to be about 4 billion miles (6.4 billion kilometers) from Earth. The discovery was deemed enough to warrant an extended search, and the team was awarded coveted time with the powerful observatory.

"I am delighted that our initial investment of Hubble time paid off," Matt Mountain, director of the Space Telescope Science Institute in Baltimore, which operates Hubble, said in a statement. "We are looking forward see if the team can find a suitable KBO that New Horizons might be able to visit after its flyby of Pluto."