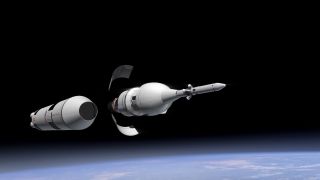 The first flight test of NASA's new manned spacecraft may be six months away, but agency engineers are already looking forward to what they will learn from the trial.

NASA's Orion capsule, which is designed to take astronauts to Mars and other farflung destinations, will blast into space for the first time in December. During the unmanned mission, known as Exploration Flight Test-1 (EFT-1), Orion will travel 3,600 miles (5,790 kilometers) from Earth, then come rocketing back into the planet's atmosphere at 20,000 mph (32,187 km/h).

The December trial is a vital proving ground, since NASA plans just one more flight test (in 2017) before the capsule's first crewed mission lifts off in 2021. [Photos: NASA's Orion Space Capsule EFT-1 Test Flight in Pictures]

For example, EFT-1 will test out Orion's launch-abort system (LAS), which is designed to steer crewmembers to safety in the event of a problem during liftoff. Even if the launch goes flawlessly, however, a motor has to fire to jettison the LAS, which would otherwise block Orion's parachutes, making a soft ocean splashdown impossible.

So engineers will watch for the successful separation of the LAS during EFT-1 — the first of 17 such jettisons that must happen in sequence for the mission to succeed, officials said.

EFT-1 will also put Orion's heat shield — at 16.5 feet (5 meters) wide, the largest such structure ever built — to the test.

"The reason that Orion is traveling so far and coming back in so fast is to give the heat shield a good workout — the idea is to get as close as possible to the temperatures Orion would experience during a return from Mars," NASA officials wrote in an update Thursday (June 18).

"At the speed it will be traveling, the temperature should reach almost 4,000 degrees Fahrenheit [2,200 degrees Celsius]," they added. "At that same temperature, a nuclear reactor would melt down."

Parachute performance will also be key. While Earth's thick atmosphere will play the primary role in slowing the Orion capsule down, its parachutes — three main chutes and two drogues — need to finish the job. Orion must hit the water at just 20 mph (32 km/h) to make a safe splashdown, NASA officials said.

Radiation exposure is a big concern for manned missions to deep space, which will take astronauts far beyond the protective cocoon of Earth's atmosphere and magnetic field. EFT-1 will spend a lot of time in the Van Allen radiation belts that surround our planet, allowing researchers to see how Orion's radiation shielding holds up.

"Sensors will record the peak radiation seen during the flight, as well as radiation levels throughout the flight, which can be mapped back to geographic hot spots," NASA officials wrote.