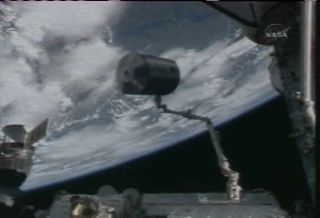 Discovery's STS-121 astronautsretrieved their Italian-built Leonardocargo module from its berth at the space station's Unity node and tucked itaway in the shuttle's cargo bay for the return flight to Earth.

Later today, the crew will check formicrometeoriteimpacts to Discovery's port - or left - wing leading edge using theshuttle's sensor-laden inspection boom. The crew will undock from the ISS at 6:08 a.m. EDT (1008GMT) on Saturday and inspect the orbiter's starboard wing edge and nose cap.

The shuttle's primary reactioncontrol thrusters, rather than its smaller vernierengines used for fine maneuvers, will be used to back away from the ISSSaturday, NASA officials said. The change will mean that Discovery's motionswill be larger, and rather crude according to some astronauts, but should notbe a challenge for Lindsey and STS-121 pilot MarkKelly.

"The crew is trained to do that,they understand what they're looking for, so there's no concerns onthat," Ceccacci said. "Basically, you don't have asfine control as you would on verniers."

While Discovery's shuttle crewprepares for undocking, a team of engineers continues to pore over issueswith two of the shuttle's three Auxiliary Power Units (APUs),Ceccacci said.

Thermostat failures have lead twoheaters on APU 3 to fail in the "On" mode, which - though unexpected - is not thoughtto be a major problem.

The other problem concerns apossible leak in APU 1, either with its nitrogen supply or toxic hydrazinefuel, Ceccacci said. A nitrogen leak is ratherbenign, but a hydrazine leak could lead to a fire akin to that seen duringSTS-9 in 1983, though engineers are studying the issue and will updateDiscovery's Mission Management Team (MMT) later today, he added.

According to a mission summary uplinked to Discovery's crew this morning, the threat of ahydrazine fire appears to be low.

"In fact, at this leak rate, thehydrazine vapor concentrations will remain well below the flammability limitsin the aft compartment for reentry," the crew's Flight Day 11 execute packagereported, adding that engineers are still unsure if it is hydrazine or nitrogenleaking from APU 1. "The teams continue to work around the clock on the groundto quantify the effects of the small N2 of fuel leak and the forward plan forreentry."

With Discovery's Leonardo cargo podback inside its payload bay berth, the ISS is now set for futureconstruction flights to expand its living area and crew size.

"After 121's successful completionhere we can continue with assembly ops," said Rick LaBrode,NASA's lead ISS flight director for STS-121. "And if we weren't successful, weweren't going to be able to do that."

"On this particular flight, we'vetransferred more payload cargo than any other shuttle flight," LaBrode said.

Discovery is also hauling about4,600 pounds (2,860 kilograms) - 300 pounds (136 kilograms) more than expected- of unneeded cargo back to Earth aboard Leonardo, with an additional 1,800pounds (816 kilograms) worth to be tucked in its middecklockers.

NASA will broadcast Discovery'sSaturday undocking live on NASATV beginning with a crew farewell ceremony at 3:38 a.m. EDT (0738 GMT). You are invited to watch the activity via SPACE.com's NASA TV feed, which is availableby clicking here.