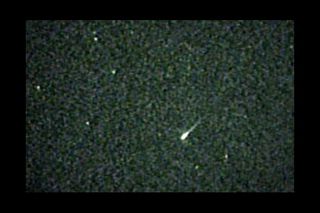 Skimming 20,000 feet (6,096 meters) above the ground, a group of scientists led by the SETI Institute's Peter Jenniskens spotted at least a dozen meteors that belong to a brand-new meteor shower.

The Camelopardalids– so named because they appear to emanate from the constellation Camelopardalis (The Giraffe) – were visible across North America early in mid-May, but the celestial show was disappointing to someafter early forecasts said it would reach 200 meteors an hour.

Jenniskens and SETI Institute CEO David Black, however, said the absence of high activity was interesting. They're studying how the meteors interact with the upper atmosphere, and how active the dusty Comet 209P/LINEAR was in the last 200 years as it shed material that eventually formed the shower. [Camelopardalid Meteor as Bright as Jupiter Seen by NASA (Video)]

"Comets are fanciful and finicky performers, and we knew well enough it could be a really spectacular show or something less than that," Black told reporters during a news teleconference last month. "But from a science perspective … this tends to bring us closer to understanding these remarkable, important members of the solar system family."

Jenniskens and colleague Esko Lyytinen of Finland first proposed the Camelopardalis meteor shower would happen a decade ago, after 209P/Linearwas discovered. This year, the Earth's path took it through debris the comet shed from the 18th century to the middle of the 20th century.

"It's very exciting to be able to peel back in time, and it looks like even in those days when the comet was still much closer to the sun, it was still a weakly active comet at that time," Jenniskens said.

To photograph the entire sky, his team carried five "intensified" cameras – equipped with night vision – in two locations on the plane. The flight left from Palo Alto, California, around 1 a.m. EDT (10 p.m. PDT), then flew a path toward Seattle before touching down in Palo Alto again four hours later.

The sleep-deprived Jenniskens – who said he was too excited and busy to get much rest between then and the news conference – said the data is preliminary, but with more time they hope to understand how the comet changed over the centuries.

"The meteors were relatively bright, and there was really a lack of any faint meteors," Jenniskens said. "That gives us information on what the ejection conditions are during the release."

SETI's Allen Telescope Array also picked up some activity in microwave wavelengths, but Black cautioned it was too early to make predictions about what scientists saw. The recorded emissions will need to be processed by computer before the data becomes evident, he added.

"We did get a couple of early data reductions that looked like, for the most part, like the close-up of an area rug," he joked. "We're hoping to see ... any emissions from the meteors, so you look at something from the meteor itself as well as its effect on the surrounding atmosphere."

Jenniskens called the meteor observations "an incredible vindication" of the prediction he made years ago.

"This could have been nothing, and that's what we kept emphasizing," he added. "There could be no meteors at all. That was the scary part, and it was quite the contrary. It was just incredible to see these meteors actually show up."

Editor's Note: If you caught an amazing photo of the new meteor shower, or any other night sky view, that you'd like to share for a possible story or image gallery, please contact managing editor Tariq Malik at spacephotos@space.com.