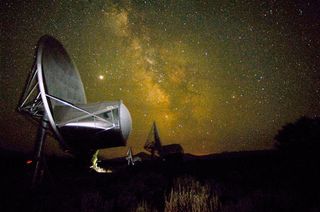 Antennas of the Allen Telescope Array have been used to study signals from remote galaxies, supernova remnants, extrasolar planetary systems, and the interstellar medium. Each antenna is about 20 feet wide. A new contracted job is to assist the U.S. Air Force in situational awareness and detect space debris.
(Image: © SETI Institute)

The United States Air Force Space Command is on the lookout to improve its Space Surveillance Network, a global setup of radar and optical sensors that detect and track orbiting space junk and satellites.

According to a deal announced April 13, the non-profit research institute SRI International is the new manager of the Hat Creek Radio Observatory in Northern California. That observatory includes the Allen Telescope Array built by the SETI Institute and the University of California.

The Allen Telescope Array is bankrolled, in part, by the well-heeled Paul Allen, a Microsoft co-founder. Its primary mission, like that of SETI, is to listen for any signals that could be from an intelligent civilization among the stars. [10 Alien Encounters Debunked]

Under SRI's new management role, the Allen Telescope Array is to spend some time conducting space situational awareness and detecting space debris under contract with the U.S. Air Force.

The ATA is a unique and flexible research instrument designed as a "Large Number of Small Dishes" array. Collectively, it is a 42-dish ATA radio telescope that can operate in multiple frequency bands while its digital hardware runs scientific experiments, such as creating images of the sky.

Located in a remote area of Northern California, the ATA receives relatively low levels of radio interference and is surrounded by volcanic mountains that keep out interferences, such as television, radio and distant cellular phone transmissions.

According to the Air Force, through its Space Innovation and Development Center, the ATA can augment the already extensive sensors of the Space Surveillance Network.

Thanks to initial demonstrations using the ATA, the telescope shows the ability to track transmitting satellites in low-Earth orbit, medium-Earth orbit and, most promising, according to the Air Force, in geosynchronous orbit (GEO), which is home to the most costly, highly used, and vital satellites that orbit the Earth.

A collision and subsequent orbital debris field in GEO could permanently remove the GEO belt from worldwide use.

An early use of the ATA for satellite tracking involved the Global Positioning System satellites. The accuracy of the array's observations of GPS spacecraft was assessed.

The Air Force has noted that working with the ATA "may be a natural win-win relationship."

Do the new Air Force duties crimp the use of the ATA to scan the heavens for evidence of ET?

"Because we have planetary systems across the sky, we can effectively share the ATA with the Space Situational Awareness mission," said Jill Tarter, director of the Center for SETI Research at the SETI Institute in Mountain View, Calif.

The alien-hunting researchers are targeting their searches on extrasolar planets discovered by NASA's Kepler Space Telescope, which searches for signs of worlds around other stars.

"We are using our SonATA — SETI on the ATA — automated signal detection system to observe the thousands of Kepler worlds and exoplanets that have been discovered in the past few years," Tarter told SPACE.com. "Life as we know it is a planetary phenomenon, so we are interested in exploring planets."

Tarter said the equipment can be pointed at known planetary systems and explore the terrestrial microwave window from 1 to 10 gigahertz in search of radio emissions from distant technological civilizations.

"As SRI begins to manage Hat Creek, we look forward to expanding the use of the Allen Telescope Array to support the wider scientific and technical community in radio astronomy and space science," said Scott Seaton, vice president of SRI's Engineering Research and Development Division, in a news statement.