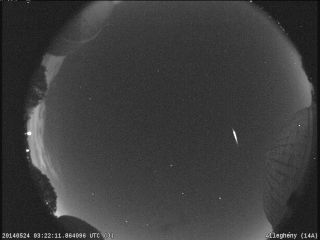 A brilliant meteor as bright as Jupiter streaks across the sky in this NASA all-sky camera view of the Camelopardalid meteor shower of early May 24, 2014. The meteor shower was created by dust from Comet 209P/LINEAR.
(Image: © NASA/MSFC/Bill Cooke)

A new meteor shower sparked some celestial fireworks late Friday and early Saturday (May 23-24), amazing stargazers across North America even though it did not reach the spectacular "meteor storm" levels that some had hoped for.

The first-ever Camelopardalid meteor shower peaked in the wee hours of Saturday, offering stargazers a rare sight — the debut meteor display from the dusty Comet 209P/LINEAR. Photos of the new meteor shower sent in to Space.com show amazing views of meteors over Toronto, Indiana and even through the northern lights of Canada.

Early forecasts from NASA, SETI and other meteor tracking groups said the shower had the potential to be truly dazzling, with a forecast of 200 meteors per hour. But the scientists also stressed that, because of the unknown nature of the meteor shower, it could fizzle out. Astronomer Tony Phillips of the skywatching website Spaceweather.com reported Saturday that the new shower peaked at between five and 10 meteors per hour. [Camelopardalid Meteor as Bright as Jupiter Seen by NASA (Video)]

"Although this is a far cry from predictions, it is hardly a surprise," Philips wrote in a Spaceweather.com update. "The parent comet, 209P/LINEAR, is faint and currently produces only a small amount of dust. Most forecasters acknowledged that there might be less dust in Earth's path than the models suggested."

"Another possibility is that the shower is not a dud, just delayed," Phillips wrote. "If models mis-located the debris zone, an outburst could still occur later on May 24th."

The Camelopardalid meteor shower gets its name from the constellation it appears to radiate from — Camelopardalis (The Giraffe) — and was primarily visible from North America. It is made of dust leftover from the relatively dim Comet 209P/LINEAR, which was discovered in 2004 and orbits the sun once every five years.

Stargazer Gail Lamm captured a stunning meteor photo while watching the Camelopardalids from just a few miles north of Balmoral, Manitoba in Canada.

"I went out looking for the meteors last night, didn't see too many, but I did manage to get a picture with a bit of the northern lights, the Milky Way and a small meteor," Lamm told Space.com in an email, adding that the meteor appeared low on the horizon.

"I saw about 10 [meteors] for the two hours I was out, and this was the biggest and brightest," Boyd told Space.com in an email. "Also, the Milky Way can be seen in the right part of the photo."

The Italy-based Virtual Telescope Project featured a rotating view of photos by astrophotographers, while NASA's Marshall Space Flight Center streamed live views from an all-sky camera. A team of astronomers led by meteor scientist Peter Jenniskens of the SETI Institute in Calfornia aimed to observe the meteor shower from above the clouds by flying at 20,000 feet aboard a specially chartered jet.

NASA meteor expert Bill Cooke, head of the Meteoroid Environment Office at the Marshall center in Huntsville, Alabama, said his team captured a stunning video of a Camelopardalid meteor as bright as Jupiter during the night.

By studying the number of meteors from the Camelopardalid shower, astronomers can learn how active Comet 209P/LINEAR was 200 years ago, Cooke said. The dust emanated from comet two centuries ago is what created the meteors seen early Saturday, he added.

Editor's Note: If you caught an amazing photo of the new meteor shower, or any other night sky view, that you'd like to share for a possible story or image gallery, please contact managing editor Tariq Malik at spacephotos@space.com.

Email Tariq Malik at tmalik@space.com or follow him @tariqjmalik and Google+. Original article on Space.com.