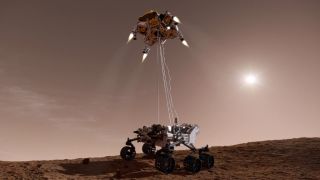 Curiosity in the final stages of winching itself down from the descent stage, a maneuver called "sky crane."
(Image: © NASA/JPL-Caltech)

Rod Pyle is a space author and documentary producer. He led leadership training at NASA's Johnson Space Center for its top executives and has written extensively about space exploration and organizational principles. Pyle's latest book is "Innovation the NASA Way: Harnessing the Power of Your Organization for Breakthrough Success " (McGraw-Hill, 2014). He contributed this article to Space.com's Expert Voices: Op-Ed & Insights.

Following the magnificent success of the complex sky crane system that delivered Curiosity to Mars in August 2012, and the rover's successes since then, NASA is working briskly on plans for another Curiosity-class Mars rover to visit the red planet, it is hoped, during the 2020 launch opportunity.

Functionally, the 2020 rover is a virtual clone of Curiosity . It will even utilize the backup nuclear power source from Curiosity (one of the few left in the U.S. inventory). This results in over a billion dollars in estimated cost savings by reducing development costs. Yet, despite this reliance on current technology, engineers will need to innovate many new designs for this mission to be successful.

First, there is the mission itself. Once the 2004 Mars Exploration Rovers (MERs) Spirit and Opportunity confirmed the evidence of a wet Mars in the distant past (tantalizing promises came from both from orbit and by Pathfinder in 1997), Curiosity's purpose was confirmed as an astrobiology mission. By this, NASA was not saying that it would search for life the way Viking did in the 1970s; rather, it would seek formerly habitable environments on and just under the Martian surface. The instruments carried onboard would be specifically accommodate that mission goal. From the ChemCam laser-firing spectrometer, to the SAM and Chemin onboard laboratories, to the Powder Acquisition Drill System, or PADS, drill, the entire rover was optimized for that task while still being capable of other research activities.

With voluminous results flowing in from Curiosity's nearly two Earth-years on Mars, the lessons learned can be applied to the 2020 rover and its mission design. This new machine will serve two primary duties. First, it will continue to refine data on once-habitable environments and test for biosignatures — chemical signs of past life. Second, it will identify rocks and soils that look promising — and for selected sites it is planned to take core samples, then store these samples for possible later pickup by a sample-return mission, as yet to be determined (and not yet funded).

Moving on to technological demands, it is this enhanced sample-gathering and caching capability that will be begging for innovation. The new rover will carry an updated drill and core-sampling mechanism, an evolved instrument package to identify and then analyze sample targets, and a caching mechanism in which up to 31 samples will be stored for eventual return to Earth by a subsequent lander, once (and if) approved.

Perhaps not since the Viking program of the 1970s has optimism run so high for a Mars mission. For Viking, anticipation centered on basic on-board tests of soil samples in an attempt to find Earth-like microorganisms. For the 2020 rover, the optimism is fueled by possible detection of past (and possibly present) life forms. The return of cached samples is a much larger challenge, involving a landing, cache retrieval, liftoff and rendezvous with a spacecraft equipped to return the samples to Earth. Never has such an involved, multi-step mission been attempted, and though sample-caching is part of the 2020 mission, a return trip is not. As the JPL team members like to say, "Mars is hard." ['Innovation the NASA Way' (US 2014): Book Excerpt ]

Perhaps even more challenging is finding the money to go there, and in the case of the sample-return, to come back.

So what else is there to innovate for this new mission and its successor? Curiosity has simple, shallow-surface sample-gathering machinery, but robotic deep-drilling and especially core-extraction technologies are still in their infancy. Drilling a few inches of rock into powder and transporting a few grams of that up into a collection drum is one thing; extracting a core sample is much more challenging. Remember, whether mudstone or harder targets, these are rocks the rovers will be sampling. This will require incremental, but careful, innovations that can be designed, tested, tested again and deployed to work in a harsh and remote environment.

Likewise the on-board analytical instrumentation will be a challenge. The Viking landers shrank a rudimentary life-science laboratory down to the size of a dishwasher. Fast-forward to Curiosity and you have machines that can test samples to a molecular level, even revealing atmospheric analysis and the isotopic numbers of gasses given off by the baking of rock samples. To search for true biosignatures in rock and soil samples will require even more finesse and technological acumen. [NASA Space Tech, Science & Exploration Goals in 2015 in Pictures (Gallery )]

The 2020 rover will rely heavily on Curiosity's successful platform in terms of overall design and function. The differences will be mostly in the above-mentioned areas — instrumentation and sampling improvements. But a subsequent landing mission — to return with Martian soil samples — would require a new overall design and another major overhaul of the landing system. Pathfinder and the MER rovers used airbags to bounce to a landing, scrubbing off energy as they did so. Curiosity used (and the 2020 rover will use) guided entry and the sky-crane system, the amazing rocket pack and rappelling device that worked so well in 2012. This change was dictated by the mass of the lander and a continuing desire for improved precision in the landings. A sample-return mission, which would by design be intended to seek out the cache of samples left by the 2020 rover, will likely be heavier still, and a new landing system will be required. That system may be derivative of Curiosity's, but this is currently under study. Much of the engineering team from Curiosity was moved to the 2020 mission, and some were sent off to study new and alternative landing technologies. This might entail a collapsible landing stage, which is crushed during touchdown, absorbing much of the energy. Or it might utilize something involving larger rockets in different a configuration. Or it could be a not-yet-conceived system as outrageous as the sky crane seemed when the world first laid eyes upon it back in the early 2000s.

New and innovative guidance techniques are also under development, based on experience from Curiosity. That spacecraft was guided to its narrow landing corridor by inertial guidance coupled with ranging radar. Put simply, it knew its exact location relative to Mars when it encountered the atmosphere, and then calculated the navigational adjustments to reach the assigned spot at Gale Crater. Velocity and atmospheric measurements from the outer hull refined this glide path. It was a remarkable bit of computation.

The Mars 2020 mission  will reduce the size of the landing zone — or "landing ellipse," in the parlance — down to about 4 miles by 7 miles, smaller than even Curiosity's by half. Two promising technologies are being studied. The first, called range trigger, releases the parachute only after measuring the distance to the surface and factoring in other variables such as wind speed and air density (previous landers did this by measuring velocity). The second, terrain relative navigation, combines measurements of the bearing of known landmarks with other onboard measurements to further refine landing accuracy. These and other technologies will help to guide the 2020 rover to its prime landing site, and subsequent sample-return missions, if any, to the sample cache the 2020 rover prepares.

At the end of this pathway lies, of course, the goal of human exploration of Mars. Unless some other target becomes so enticing as to replace it, Mars remains the Holy Grail of human spaceflight. Components of Curiosity's mission, specifically the radiation detection instrument, are critical tools for continuing to develop a realistic mission plan for reaching the red planet. The 2020 rover will return even more data critical to human survival en-route to, and on, Mars. It may also test in-situ resource utilization strategies, depending on the final instrument and experiment selections. Of course, a sample return would provide a bounty of information about how the surface environment can be utilized and made safe for human explorers.

But this is all far in the future. Robotic exploration must precede any crewed missions. And with ever-tightening budgets and competing priorities, the Mars exploration program must remain clever, nimble and innovative to stay on course. Whatever the new designs may entail, you can be sure that the designers, researchers and engineers at JPL will come up with new, and very likely, startling methods to cope with the challenges of continued exploration of the red planet. The spirit of innovation, both in incremental and disruptive terms, is alive and well as we prepare to head off, once again, to rove Mars.

Follow all of the Expert Voices issues and debates — and become part of the discussion — on Facebook, Twitter and Google +. The views expressed are those of the author and do not necessarily reflect the views of the publisher.  This version of the article was originally published on Space.com.