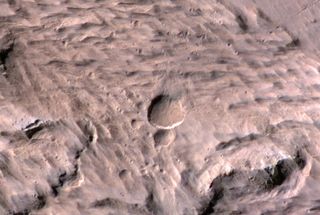 Scientists discovered a fresh crater carved into the surface of Mars by a March 2012 impact. This image was taken by the High Resolution Imaging Science Experiment (HiRISE) camera on NASA's Mars Reconnaissance Orbiter.
(Image: © NASA/JPL-Caltech/Univ. of Arizona )

An eagle-eyed NASA spacecraft has spotted a fresh crater on Mars large enough to cover half of a football field, and it's no puny Martian pockmark. In fact, the crater is the largest new impact site ever seen on the Red Planet using orbiter photos.

NASA's powerful Mars Reconaissance Orbiter captured the photo of the new Martian crater after it suddenly appeared in March 2012. Mission scientists say it is the biggest fresh impact crater scientists have confirmed on any planet by using before-and-after images.

The crater likely was carved by a car-size asteroid in an impact event similar to last year's meteor explosion over Chelyabinsk, Russia, which shattered windows, damaged hundreds of buildings and left more than 1,000 people injured, NASA officials said.

Mars' new scar was first spotted about two months ago by Bruce Cantor, a scientist with Malin Space Science Systems who puts together weekly Martian weather reports. Cantor noticed an unusual dark dot while he was looking for dust storms and other events using images taken by the Mars Color Imager, or MARCI, a weather-monitoring camera built by Malin Space Science Systems on board NASA's Mars Reconnaissance Orbiter.

"It wasn't what I was looking for," Cantor said in a statement. "I was doing my usual weather monitoring and something caught my eye. It looked usual, with rays emanating from a central spot."

By going through the archives of daily images of the site, Canton pinpointed the date the impact event occurred. The crater was absent March 27, 2012, and then appeared sometime before the photo opportunity, on March 28, 2012.

Subsequent images taken with the orbiter's Context Camera (CTX) and High Resolution Imaging Science Experiment (HiRISE) revealed that there are actually two main craters at the site. These holes are surrounded by more than a dozen smaller pockmarks, likely created by bits of the blasted asteroid or material ejected from the main craters. Darkened slopes in the 5-mile (8 kilometers) area around the craters suggest shock waves from the cosmic collision even triggered Martian landslides, NASA officials said.

The largest crater is quite shallow and spans 159 feet by 143 feet (48.5 meters by 43.5 meters). It was probably created by an object 10-18 feet (3-5 meters) long, HiRISE Principal Investigator Alfred McEwen of the University of Arizona, Tucson estimated. That's less than a third the length of the asteroid that hit Earth's atmosphere near Chelyabinsk. Mars' atmosphere, however, is much thinner than the one surrounding Earth, making the Red Planet more vulnerable to asteroid strikes. A study last year found that Mars likely gets hit with more than 200 asteroids annually.