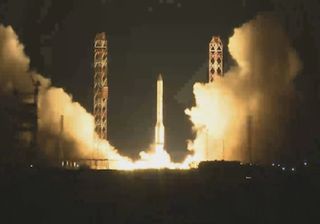 An advanced Russian communications satellite was destroyed Thursday (May 15) when its Proton rocket booster failed minutes after liftoff from the Baikonur Cosmodrome in Kazakhstan.

But a few minutes after the 12,720-pound (5,770-kilogram) Express AM4R satellite launched from Baikonur, Russia's primary space base, its Proton rocket ran into a problem. [How Russia's Proton Rockets Work (Infographic)]

The failure occurred during the third stage of the Proton's ascent into orbit, according to a statement by the Khrunichev State Research and Production Space Center, the Moscow-based manufacturer of the Proton launcher.

An announcer declared an emergency during a live webcast of the launch, and Khrunichev's statement also described the incident as an "emergency situation."

Khrunichev said experts were analyzing telemetry to determine the cause of the failure.

A report by Interfax said debris from the rocket may have fallen the Altai or Amur regions of Russia's Far East.

The hydrazine-fueled rocket disappeared from the view of a ground-based tracking camera a few minutes later, with no visible signs of any trouble.

But a problem occurred about 545 seconds, or about 9 minutes, after liftoff, according to a report by the semi-official Itar-Tass news agency.

Another report by the Interfax media service said the time of the failure was about 500 seconds after launch.

Both of the times reported for the anomaly occurred during the firing of the Proton rocket's third stage, which is powered by an RD-0213 main engine generating 131,000 pounds of thrust. A four-nozzle vernier steering engine is also mounted on the third stage to keep the rocket pointed in the right direction.

The rocket's guidance, navigation and control system is a triple-redundant digital avionics package on the third stage.

Thursday's mishap marks the fifth launch failure of the Proton rocket or its Breeze M upper stage in 36 flights since December 2010. Another Proton/Breeze M mission put the Russian Yamal 402 communications satellite in the wrong orbit, but the spacecraft was able to boot itself to the correct location.

The string of mishaps has brought focus on the quality control procedures of Khrunichev and its suppliers, with the Russian space contrator announcing expanded inspections, video monitoring in its factories and other measures to bolster the Proton's reliability.

Thursday's launch was the 397th Proton mission since 1965. Overall, the rocket has a success record matching the world's leading satellite launchers.

Officials said Proton rockets would likely be grounded until investigators find the cause of Thursday's failure and issue corrective recommendations. After a Proton rocket veered out of control moments after a launch in July 2013, an inquiry found technicians installed accelerometers in the rocket upside down, resulting in a two-month grounding of the Proton vehicle.

The five Proton or Breeze M launch failures since December 2010 have all been on Russian federal missions. Only the partial launch failure on the Yamal 402 mission was on an ILS flight.

ILS officials say they offer additional mission assurance services on Proton launches under their responsibility. The ILS Proton is one of the three leading rockets in the international launch market, alongside the European Ariane 5 and SpaceX's Falcon 9. [See a video of the Proton rocket failure]

Express AM4R was owned by the Russian Satellite Communications Co., a state-owned operator that serves a mix of government and commercial users.

The Proton rocket's Breeze M upper stage was programmed to take over control of the mission about 11 minutes after liftoff with a series of five engine burns to put the Express AM4R satellite into a high-altitude geostationary transfer orbit, a waypoint on the way to the craft's final operating position 22,300 miles over the equator.

But the core three-stage Proton booster, which was designed to propel the Breeze M and its payload on a suborbital trajectory, was unable to complete its job.

Express AM4R was ordered by RSCC from Airbus, then known as Astrium Satellites, in 2012 to replace a satellite lost on a previous Proton/Breeze M failure.

The spacecraft was to be positioned in geostationary orbit at 80 degrees east longitude.

Described by RSCC as Russia's most powerful communications satellite, it was based on the Eurostar E3000 platform built by Airbus.

The satellite carried 63 transponders in C-band, Ku-band, Ka-band and L-band.

The launch of Express AM4R was part of a strategic expansion by RSCC, which said it planned eight satellite launches from 2013 to 2015, doubling the company's communications capacity.