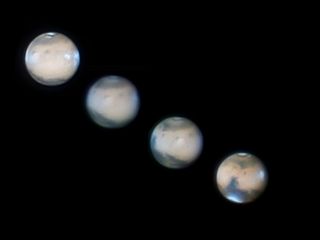 Astrophotographer Andrew Kwon sent in a composite image showing Mars on four different nights. He writes in an e-mail to Space.com: "These 4 were taken from March 27th to this morning April 6th. With opposition only coming every 26 months I am out every clear night imaging the red planet from my backyard observatory in Mississauga, ON."
(Image: © Andrew Kwon)

A cosmic alignment between Earth and Mars is giving stargazers eye-popping views of the Red Planet.

On April 8, Mars reached an orbital milestone known as "opposition," an event that occurs only once every 26 months when the planet aligns with Earth and the sun. Six days later, on April 14, Mars made its closest approach to Earth in six years, coming within 57.4 million miles (92 million kilometers) of our planet, making it a prime target for amateur astronomers.

Astrophotographer Andrew Kwon in Canada sent in a composite image showing Mars on four different nights. The bright rust coloration of Mars is known for is due to iron-rich minerals. [Spectacular Night Sky Photos for April 2014 (Stargazing Gallery)]

"These four were taken from March 27th to this morning April 6th," Kwon wrote in an email to Space.com. "With opposition only coming every 26 months I am out every clear night imaging the Red Planet from my backyard observatory in Mississauga, ON [Ontario]."

Another image shows Mars and star Spica near each other in the night sky at Fremont Pass in Colorado. Astrophotographer Daniel McVey sent this photo submitted March 26.

Mars is easy to spot in the night sky now as it lies in opposition to the sun and relatively close to Earth. Spica, a blue-white giant, is the brightest star in the constellation Virgo. In the image, the constellation Corvus, the Raven, a small constellation with 11 stars visible to the naked eye, can also be seen.

Correction: This story was corrected on April 17 to reflect that the opposition of Mars occurs once every 26 months.