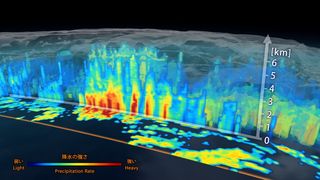 NASA and the Japan Aerospace Exploration Agency (JAXA) today released the first images from a new satellite that can image precipitation on Earth in 3D.

Scientists gave the satellite a sort of shake-down cruise in early March by capturing precipitation inside a cyclone over the northwest Pacific Ocean (above).

VIDEO: How Space Weather Is Messing With Satellites

The satellite uses two different instruments that can detect subtle differences in precipitation — light rain for example, or a mix of falling snow and ice.

NASA says the satellite is the first spacecraft designed to detect light rain and snowfall from space.

VIDEO: Wanna Launch a Satellite? You Can!

Onboard radar shows clouds in three dimensions, across the surface of Earth and upward into the atmosphere. The colors show the rain rate, or how much rain or snow is falling. Red indicates heavy rainfall —yellow and blue indicate less intense rainfall.

"I knew we had entered a new era in measuring precipitation from space, said project scientist Gail Skofronick-Jackson, at NASA's Goddard Spaceflight Center, in a release. "All this new information comes together to help us better understand how fresh water moves through Earth's system and contributes to things like floods and droughts."