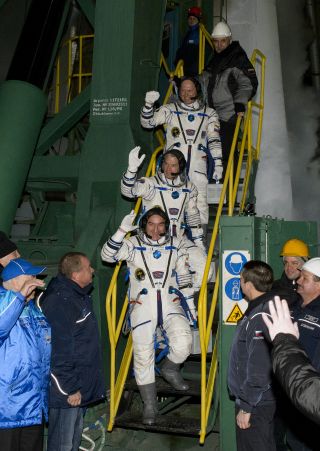 An American astronaut and two Russian cosmonauts are taking the long way to the International Space Station after their Soyuz spacecraft hit a snag after launching into orbit Tuesday (March 25).

NASA astronaut Steve Swanson and cosmonauts Alexander Skvortsov and Oleg Artemyev, will now arrive at the space station Thursday (March 27) at 7:58 p.m. EDT (2258 GMT). The crew is in no danger, and they have reported that they are feeling great, NASA spokeswoman Brandi Dean said during a webcast today. NASA and Russian ground controllers are still investigating the exact cause of the docking delay.

The Soyuz TMA-12M capsule launched into space atop a Soyuz rocket from the Baikonur Cosmodrome in the Central Asian nation of Kazakhstan at 5:17 p.m. EDT (2117 March 26 GMT) on Tuesday. While the Soyuz TMA-12M vehicle was scheduled to dock with the space laboratory about six hours after launch, the spacecraft missed an automatic engine burn, preventing it from making the expedited docking. According to preliminary reports, officials think the burn was skipped because the Soyuz vehicle wasn't in the correct orientation, or attitude, at the time. [See photos of the Soyuz spacecraft launch]

"Based on what we're hearing from our Russian colleagues, it looks like that burn did not execute because they weren't able through their normal systems checks to confirm the attitude of the vehicle was in its proper condition," Kenny Todd, mission operations integration manager for the space station, said during a NASA TV webcast. "So, not being able to confirm that, the burn did not automatically execute."

The two-day docking procedure was standard operation for crewed Soyuz launches until recently. Officials have only been using the expedited six-hour docking since 2013. Unmanned Russian cargo ships have been flying single-day trips to the station since 2012.

For a standard six-hour trip to the station, a Soyuz needs to make four orbits of Earth and perform four major engine burns, automatically initiated by the spacecraft's computer. The Soyuz TMA-12M transporting Swanson and his crewmates did not perform the third flight maneuver slated for 7:48 p.m. EDT (2348 GMT) Tuesday, NASA spokesman Josh Byerly said during a NASA TV webcast on March 25.

The Soyuz spacecraft now needs to make 34 orbits of Earth before arriving at the station. The first couple of burns for the new 34-orbit rendezvous plan have already been accomplished successfully, so the spacecraft is working well, Todd said.

Since the end of NASA's space shuttle program, the space agency has relied on Russian Soyuz spacecraft to transport astronauts into orbit. By 2017, NASA officials plan to start using private U.S. spaceships to ferry crews to and from space.

Swanson, Skvortsov and Artemyev are scheduled to live and work on the space station for close to six months as part of the Expedition 39 and 40 crews. Once on the orbiting laboratory, they will join NASA's Rick Mastracchio, Japanese astronaut Koichi Wakata and cosmonaut Mikhail Tyurin.

The delayed arrival of the Soyuz will not affect the planned launch of an unmanned cargo mission to the station scheduled for Sunday (March 30), NASA officials said today. The private spaceflight company SpaceX will launch its third resupply mission to the orbiting outpost using its Dragon capsule and Falcon 9 rocket.