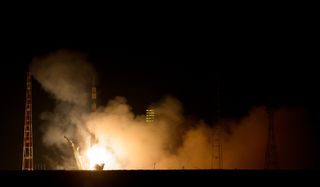 The Soyuz TMA-12M space capsule launched into space Tuesday carrying an American astronaut and two Russian cosmonauts on what was expected to be a standard six-hour trip to the International Space Station. But the Soyuz spacecraft missed a critical engine burn to keep the capsule on course for its planned orbital arrival Tuesday night.

Riding aboard the Soyuz are NASA astronaut Steve Swanson and cosmonauts Alexander Skvortsov and Oleg Artemyev. The U.S.-Russian crew will now arrive at the station on Thursday evening (March 27), NASA spokesman Josh Byerly said in an update. [See photos of the US-Russian crew's Soyuz launch]

"The crew is fine, but the ground teams are taking a look at what exactly happened aboard the Soyuz and what caused that [engine] burn to be skipped," Byerly said during NASA's televised coverage.

Russian Soyuz engineers are unsure if a software glitch or a mechanical malfunction caused the problem, Byerly said. An initial look at conversations between mission flight controllers in Moscow and Houston suggests, that the problem may beem caused by the Soyuz not being in the proper orientation for the planned engine burn, according to a NASA status update.

The Soyuz capsule launched into orbit atop a Russian-built Soyuz rocket from the Central Asian spaceport of Baikonur Cosmodrome in Kazakhstan at 5:17 p.m. EDT (2117 March 26 GMT). Its crew planned to join three other crewmates already aboard the station with docking at 11:05 p.m. EDT (0305 March 26 GMT)

Now, Swanson and his crewmates must wait until Thursday at 7:58 p.m. EDT (2358 GMT) to link up with the International Space Station, Byerly said, adding that the exact time of the docking could change.

"They have supplies to keep them in orbit for many, many days," Byerly said of the three space travelers.

Russia's Soyuz spacecraft originally flew on two-day rendezvous flights to the space station similar to the backup trajectory the current Soyuz mission is forced to fly now. It is a two-day trip that includes 32 orbits of Earth in order to catch up with the space station. The last two-day Soyuz trip before this mission was in December 2012.

"Right now we don't understand exactly what happened, so we'll analyze and review all the telemetry of it," a Russian flight controller radioed the Soyuz crew, according to a audio translation.

Russia's three-person Soyuz spacecraft are currently the only vehicles capable of ferrying astronaut and cosmonaut crews to and from the International Space Station. NASA retired its space shuttle fleet in 2011, and is dependent on Russian Soyuz vehicles to fly American astronauts to the station and back. The U.S. space agency plans to fly American astronauts on commercial U.S. spacecraft beginning in 2017.

Swanson, Skvortsov and Artemyev are due to spend nearly six months in space during their current mission, which will bridge the space station's Expedition 39 and 40 crews. The trio will join Expedition 29's Japanese astronaut Koichi Wakata, NASA astronaut Rick Mastracchio and cosmonaut Mikhail Tyurin already aboard the station, then stay on to serve as the outpost's Expedition 40 crew.

Editor's Note: This story was updated at 10:50 pm ET to clarify that the cause of the Soyuz spacecraft's missed engine burn is being studies as a possible software issue, mechanical malfunction or incorrect attitude.