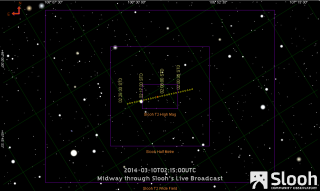 An asteroid at least the size of a 60-story building will make a distant flyby of Earth this week, and you watch astronomers track the space rock tonight (March 9) in a live webcast, weather permitting. The asteroid poses no threat to Earth.

"Slooh is featuring 2014 CU13 in a live broadcast from its flagship observatory at the Institute of Astrophysics of the Canary Islands on Sunday, March 9th … in order to call attention to this asteroid so that amateur astronomers will help further pinpoint its orbit," Slooh officials said in a statement. [Photos of Potentially Dangerous Asteroids]

"Discovering near-Earth asteroids has become an automatic process for the survey telescopes, but discovery is just the beginning — there is so much science to do after that!" Galache said in a statement. "Amateur astronomers with access to pro-level telescopes under dark skies are in a great position to learn more about an asteroid than just where it's going."

Tonight's Slooh webcast follows three close flybys of asteroids last week in which newly discovered space rocks buzzed the Earth at a distance inside the orbit of the moon. The third of those flybys, which occurred Thursday (March 6), brought the small asteroid 2014 EC extremely close to Earth, within 38,300 miles (61,600 km) .

"This is not an unusual event," Paul Chodas, a senior scientist in the Near-Earth Object Program Office at NASA's Jet Propulsion Laboratory in Pasadena, Calif., said in a statement at the time. "Objects of this size pass this close to the Earth several times every year."

The first asteroid found in 2014 actually hit the Earth, but it was tiny. The asteroid, called 2014 AA, was about the size of a car was discovered Jan. 1 and broke apart in Earth's atmosphere by Jan. 2.

Slooh officials said tonight's webcast of asteroid 2014 CU13 is a follow-up to the group's Feb. 18 tracking of asteroid 2000 EM26, a space rock with an orbit so poorly defined that it's gained the nickname "Moby Dick."

"We are going to rally citizen astronomers to help us help the Minor Planet Center and NASA/JPL track these near-Earth objects. As we've seen with Moby Dick, all the effort that went into its discovery is worthless unless follow-up observations are made to accurately determine their orbits for the future", Cox said in a statement. "And that's exactly what Slooh Members are doing with NEA 2014 CU13 — using Slooh's robotic telescopes to accurately measure the precise position of this newly discovered asteroid."