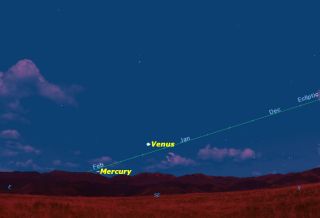 For the next few weeks, about half an hour before sunrise, Mercury will peek over the southeastern horizon for observers in the northern hemisphere. Use brilliant Venus to locate it.
(Image: © Starry Night Software)

The next few weeks offer an excellent opportunity to see the hard-to-spot planet Mercury.

Because Mercury orbits so close to the sun, it never strays far from the sun in our sky. The best opportunities come when Mercury reaches "greatest elongation" from the sun, which happens next on Friday, March 14.

Mercury alternates between being a "morning star" and an "evening star" through the year as it peeks out on one side of the sun or the other. In a typical year, there are three each of its morning and evening appearances. For the next few weeks, Mercury will be rising just before the sun in the morning. [Mercury Quiz: Simple Facts, Tough Challenge]

All apparitions of Mercury are not created equally. The ecliptic, the path of the sun and planets across the sky, is sometimes almost perpendicular to the horizon, giving lots of room for Mercury to clear the horizon. At other times, the ecliptic is at a very shallow angle, making Mercury hard to spot.

Mercury’s visibility also depends on where you're observing from. The upcoming apparition favors observers in the Southern Hemisphere, while making a much greater challenge for northerners.

An observer at a mid-northern latitude in North America about half an hour before sunrise on the morning of March 14 will see Venus in the southeast with Mercury low and well to the left of it. (The ecliptic will be at an extremely oblique angle to the horizon.)

Compare this with the view from Cape Town, South Africa, where  Mercury and Venus will be due east, and well above the horizon (and the ecliptic will be almost straight up from the horizon).

Mercury is a planet best appreciated with binoculars or the naked eye. Through a telescope, it presents an extremely tiny "half moon." Because of its low altitude, it is severely affected by the Earth's atmospheric effects. It appears to boil and bubble, and is often smeared with color because of the prism effect of our atmosphere.

An interesting trick used by observers to improve the view of Mercury is only possible during a morning apparition like this one. Locate Mercury at the optimum time, about half an hour before sunrise, and then continue to follow it in your telescope as it rises in the sky with the sun. Once it gets at least 15 degrees above the horizon, the atmospheric effects diminish, and you'll be treated to a steady view of Mercury's tiny disk. In a telescope you can see that it goes through phases just like Venus and the Moon.