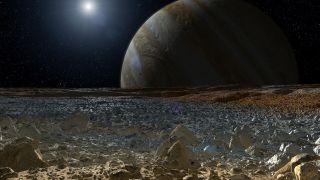 This artist's concept shows a simulated view from the surface of Jupiter's moon Europa. Europa's potentially rough, icy surface, tinged with reddish areas that scientists hope to learn more about, can be seen in the foreground. The giant planet Jupiter looms over the horizon.
(Image: © NASA/JPL-Caltech)

NASA's proposed 2015 budget includes funding to keep the International Space Station running through at least 2024, and it also sets aside some money for the development of a potential mission to the Jupiter moon Europa, which many scientists regard as our solar system's best bet to host life beyond Earth.

NASA chief Charles Bolden will discuss the budget request in detail during a press conference that begins at 2 p.m. EST (1900 GMT) today. You can watch the briefing live here on Space.com, courtesy of NASA TV. [NASA's 2015 Budget Request (Video)]

The proposed budget continues to fund NASA's bold plan to capture an asteroid and drag it into a stable orbit around the moon, where it could be visited by astronauts. The request also keeps the agency's $8.8 billion James Webb Space Telescope (JWST), the powerful successor to the famous Hubble Space Telescope, on track for a 2018 launch, officials said.

NASA's science division gets $4.97 billion in the request. In addition to supporting JWST, the money will aid the development of missions such as the InSight Mars lander, which is slated to launch in 2016, and a big Red Planet rover scheduled to blast off in 2020 to search for signs of past Mars life.

Some science funding will also go toward developing the Wide-Field Infrared Survey Telescope (WFIRST), a proposed $1.5 billion mission that would hunt for exoplanets and probe the mysteries of dark energy. NASA is considering incorporating one of two spy satellite telescopes it received from the National Reconnaissance Office into the WFIRST spacecraft.

Overall, the science portion of the budget sustains nearly 60 operating missions and funds about 35 missions preparing for launch, NASA officials said. But it slashes funding to the agency's Stratospheric Observatory for Infrared Astronomy (SOFIA), an airborne observatory that would be put into storage under the proposed budget plan.

The agency's human spaceflight branch gets $7.88 billion. The money will help keep the space station running for another decade, continue to fund private cargo deliveries to the orbiting lab and support the development of private American crew-carrying spaceships, with certification of such "astronaut taxis" coming by 2017, officials said.

The budget request also funds the development of NASA's huge Space Launch System rocket (SLS) and Orion crew capsule, a deep-space transportation system that is scheduled to fly astronauts for the first time in 2021. NASA plans to use SLS and Orion to send humans to a captured asteroid by 2025.