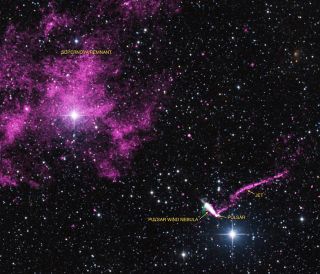 The runaway pulsar IGR J1104-6103 fires off the longest X-ray jet in the Milky Way Galaxy (jet extends up and to the right from lower right) in this view taken by combining observations from NASA's Chandra X-ray Observatory (purple) and other radio and optical telescopes. The jet's tail extends across 37 light-years, the longest ever seen. Image released Feb. 18, 2014.
(Image: © X-ray: NASA/CXC/ISDC/L.Pavan et al, Radio: CSIRO/ATNF/ATCA Optical: 2MASS/UMass/IPAC-Caltech/NASA/NSF)

A NASA X-ray telescope has detected the longest jet in the Milky Way: a corkscrew-shaped trail of high-energy particles being ejected from a speeding pulsar.

This jet stretches 37 light-years, nearly 10 times longer than the distance between the sun and its nearest neighbor star, astronomers say. NASA's Chandra X-ray Observatory spotted it coming from a pulsar that has traveled 60 light-years away from the supernova remnant it was born out of in the constellation Carina. You can see a video explanation of the runaway pulsar's jet here.

Pulsars rotate rapidly and emit a continuous beam of radiation that sweeps around like the beam from a lighthouse. Officially called IGR J11014-6103, this pulsar was first detected by the European Space Agency satellite INTEGRAL, and scientists think it is moving at speeds between 2.5 million and 5 million mph (4 and 8 million km/h). [Images: The X-ray Universe Revealed by Chandra Observatory]

"We've never seen an object that moves this fast and also produces a jet," Lucia Pavan, of the University of Geneva in Switzerland, said in a statement from NASA.

The corkscrew pattern of the X-ray jet suggests the pulsar is wobbling like a spinning top. IGR J11014-6103 is also enveloped in a pulsar wind nebula that blows behind it in a comet-like tail that's strangely perpendicular to the X-ray jet.

"We can see that this pulsar is moving directly away from the center of the supernova remnant based on the shape and direction of the pulsar wind nebula," said co-author Pol Bordas, from the University of Tuebingen in Germany. "The question is, why is the jet pointing off in this other direction?"

"With the pulsar moving one way and the jet going another, this gives us clues that exotic physics can occur when some stars collapse," co-author Gerd Puehlhofer, also of the University of Tuebingen, explained in a statement.

A study on the pulsar was published Feb. 18 in the journal Astronomy and Astrophysics. A preprint version of the paper is available online at arXiv.org.