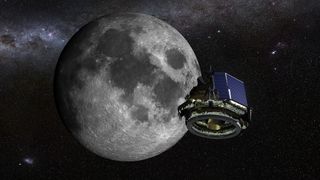 Landing on the moon is no easy feat, and five teams competing for the $30 million Google Lunar X Prize might just get a little more money to help them send their probes to the lunar surface.

Astrobotic, Moon Express, Team Indus, Hakuto and Part-Time-Scientists are all in the running to win "milestone prizes" later this year, Google Lunar X Prize officials announced today (Feb. 19). The total purse for the awards is $6 million with the teams competing in three different categories for the funds, X Prize officials said.

Each company's ultimate goal is to ready its probe for launch by Dec. 31, 2015 in order to have a shot at winning the overall prize. To win the grand prize, a company's spacecraft will need to be the first in the competition to move 1,650 feet (500 meters) on the moon and send video, images and data back to Earth from the lunar surface. The milestone prizes are designed to help teams overcome financing problems they could be facing while trying to compete, officials said. [See photos of teams competing for the Google Lunar X Prize]

"Because we have teams from such diverse backgrounds, they are often able to think of a solution that a company that may have grown up in the more traditional space engineering sense may not be even aware exists," said Google Lunar X Prize senior director Alexandra Hall. "They may not think about, 'Well, we can take this that functions like this in this environment and use it here.' That's the stuff that I think is really exciting and, ultimately, that's possibly quite game-changing."

The three categories chosen for the milestone prizes represent major hurdles that competing teams need to overcome before being able to land on the moon. According to X Prize officials, the categories are:

"The reason these three in particular were chosen is that they come directly from the things you need to do to win the Google Lunar X Prize," Hall told Space.com. "You need to be able to land successfully on the lunar surface, so your landing subsystem is clearly very important. You then need to take your high-definition video and images so your imaging system, your camera system, is very important. Then you need to be able to move 500 meters and send back more images, so how you move is the third piece of the puzzle."

"We are very pleased that the Google Lunar X Prize judging panel has selected Moon Express to compete in all three Terrestrial Milestone Prize categories," Moon Express CEO Bob Richards told Space.com via email. "To win all three categories we'll need to demonstrate our lander's ability to take off and land, translate through a representative distance, and image its surroundings according to the prize requirements."

"The Earth is different from the moon, of course, so our tests and demonstrations are designed to closely mimic the spacecraft behavior in a lunar environment while allowing for Earthly factors such as higher gravity and atmospheric pressure and drag," Richards added.

In total, teams submitted 33 proposals for the three categories, and 11 proposals from five teams were selected. If each team completes a series of tasks decided on by the teams and a panel of nine expert judges before September 2014, it will receive the set amount of prize money regardless of whether or not the other teams accomplish their goals.

"Every strategy presented to us was imaginative, forward-thinking and ambitious, which made it difficult to choose only a handful to proceed to the Accomplishment Round," David Swanson, chair of the Google Lunar X Prize judging panel, said in a statement. "As there are increasing fiscal constraints threatening the ability of governments to fund exploration, the need to recognize the bold technical achievements of these privately funded teams is greater than ever."

There are currently 18 teams working toward winning the $30 million prize.