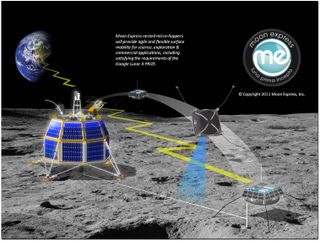 This graphic shows how Moon Express envisions its lunar lander can be used on future missions.
(Image: © Moon Express)

The 26 teams engaged in a private race to the moon won't run roughshod over the lunar surface if and when they get there.

The Google Lunar X Prize is offering a total of $30 million to the first privately funded teams to land a robot on the moon and have it complete a variety of tasks. The race will abide by guidelines NASA has established to protect historic and scientifically important sites on the moon, NASA and X Prize officials announced today (May 24).

The Playa Vista, Calif.-based X Prize Foundation will take these guidelines into account as it judges the plans submitted by the 26 teams still in the competition, officials said.

The aim is to preserve the signs of humanity's first steps on another celestial body, which were taken by a handful of NASA Apollo astronauts between 1969 and 1972, and safeguard ongoing and future lunar science efforts from a potential swarm of landers and rovers.

NASA developed the guidelines — which aren't mandatory, enforceable requirements — after analyzing data from various moon studies and consulting with experts from academia and the spaceflight community, agency officials said.

The Google Lunar X Prize will award $20 million to the first privately funded team to successfully land a robot on the lunar surface, have it move at least 1,650 feet (500 meters) and beam high-definition imagery back to Earth.

The second team to complete these tasks will receive $5 million. An additional $4 million in bonus prizes is available for achieving other feats, such as operating at night, detecting water ice and traveling more than 3 miles (5 kilometers) on the lunar surface. Finally, $1 million will go to the team that shows the greatest effort to encourage diversity in space exploration, X Prize officials said.

The Google Lunar X Prize expires once all the money has been awarded, or at the end of 2015.