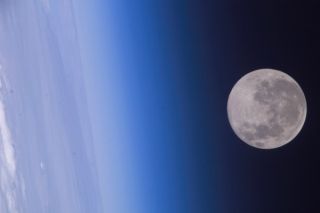 Framed by the Earth's horizon and airglow, the full moon floats in the blackness of space in this photo from the Expedition 10 crew on board the International Space Station.
(Image: © NASA)

The Google Lunar X Prize, a $30 million private race to the moon, has named a new chief.

Hall has a degree in astrophysics from the University of Leicester in the United Kingdom. She has written books about space for both children and adults, and she hosted the BBC Television show "Final Frontier."

"Alexandra has proven to be a leader and entrepreneur in the aviation and space industries," said Robert Weiss, vice chairman and president of the X Prize Foundation, in a statement. "Her breadth of experience and passion for space exploration are key to attaining our goal of igniting this new and exciting race to the moon."

The Google Lunar X prize is an international moon exploration challenge to land a robot on the lunar surface, have it travel at least 1,650 feet (500 meters) and send data and images back to Earth. The first privately funded team to do this will receive the $20 million grand prize.

An additional $10 million is set aside for second place and various special accomplishments, such as detecting water, bringing the prize's total purse to $30 million.

The Google Lunar X Prize expires whenever all prizes are claimed (or, failing that, at the end of 2015). Twenty-nine teams are currently in the race.

Hall said she is happy to be onboard.

"I believe that solving today's global challenges requires us to think beyond that which is just outside our window," Hall said. "Potential solutions to the many problems close to home exist with the development of resources in space."